I wept from Seattle to New York. Even with all the travel and aggravation I am going to miss her more than I can say – remember I asked God to give her back to us. It happened and we are grateful but we realized that she could no longer be a four hour drive and a six hour flight from both Jeff and myself. We decided to do what was best for her. And what was best for her was to be in a beautiful place with my brother ( fondly referred to as “my son, my son”) and my sister-in-law, Els (who really is a saint). They are only two minutes away and will be able to drop by every day. We saw why we did this last night when my niece came from the U of W to visit with her Nana. Devin is only an hour away. She was anxious to see Nana and despite the warnings…. “Nana lost 25 pounds and doesn’t look like herself”, Devin was happy to be with her and hold hands for an hour. What a joy that was to see. 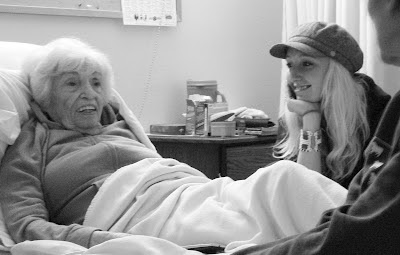 Nana and Devin in Bainbridge


We watched the Food Network for a while and saw Ina put heavy cream into sour cream and a pound of butter followed by Paula who put a pound of butter into sweetened condensed milk and four cups of half and half – did I mention the cups of sugar? Mom loves the Food Network and just kept wondering what in the heck they were cooking. In addition, she thought anything that had sour cream, sugar, heavy cream and butter had to be wonderful.

We spent yesterday doing chores. Buying cable attachments, nails, toilet paper and paper towels, hanging pictures, attaching the phones and on and on, but that was OK. We were fixing up her new life. First she went to have her hair done at Alberto’s – in her new apartment complex at the MARC. That’s the new assisted living facility. Alberto was very kind and when she walked in he took both her hands and helped her into the beauty chair. After she had her hair done she went for her ‘evaluation’. That’s when they ask you if you know where you are and what your name is. She had answered those questions so many times over the last three days that she was not likely to make a mistake. When we finished the evaluation we introduced her to her new digs and had lunch in the MARC dining room. We decided to make it a family affair so we all had soup and cheese bread. In her new incarnation as “eating like a truck driver”, she was not happy with the limited amount of food we were served and she wondered why there was no dessert. I told her the fruit on the plate was the dessert and in classic Rose she looked at me like I was nuts and said “What kind of dessert is fruit?”

My last blob took us through the arrival in Seattle. When we got Bainbridge Jeff had arranged for her to go to rehab for a few days to be evaluated. Did you ever see the play “Marat Sade”? If so, think about the opening scene when all the nuts are loose on the stage. This will give you a good idea of what the rehab facility was like. If you haven’t let me give you a taste. There were people with all kinds of horrible disabilities who were lined up in the narrow hallways in wheelchairs or on crutches or on gurneys. Some were just looking into space without many expectations – or no expectations. Some were quietly singing to themselves or talking to imaginary friends or yelling to get some help. It was, at the very least depressing beyond words. At Merry Heart, in what they call sub acute—that’s the clinical name for rehab, there were elderly people in varying conditions, but nothing like this. It was actually frightening. Apparently when Jeff and Els saw the place a week ago the hallways were empty and without much color. Anyway this was was really bordering on bizarre.

Rose was not happy when we arrived there from the ferry. We explained to her that this was not where she was going to be, but she didn’t believe us. Actually, until we took her to the MARC, she didn’t believe us. Nonetheless, she was scheduled for a few days of evaluation and therapy and decided never to come of her room. “Why would I want to eat with all those sick people?” she said. “I’ve had enough of that”. She refused to eat in the dining hall and when the volunteer came to find out what activities she liked, she refused to answer because she had no intention of staying. On Wednesday a nurse came in to ask some questions while Mom was having dinner and Mom, although cooperative, was barely civil. If you have ever met my mother you know you don’t want to be on the receiving end of her annoyance. When I mentioned that she could have been a little nicer, she said, “For my part, she could have waited until I finished eating.” I agreed but then I realized that when you are in one of those places they don’t treat you like you are a whole person, so they feel they can interrupt anything from a meal to a bowel movement. She was, as usual, absolutely right.

When we ate lunch at the MARC mom noticed that there was salt and pepper and mustard and ketchup on the table. “Did you see that?” she asked. At first I didn’t know what she meant, and then it hit me. She has not enjoyed the taste of a meal in over a year. Between her low sodium and her high blood pressure, her diet has been pretty boring. “You know what Mom” I told her. “Just have a good time. Eat what you want, and enjoy what there is available and don’t worry.” She agreed. At eighty seven (in ten days) and having been through what she’s been through, I figure why not throw a little caution to the wind.

When we were saying our goodbyes last night, it was quite emotional and I was OK until she called us over to her bed. “I had a wonderful time on the plane, it was the best fruit and coffee I ever had and I can’t thank you enough for taking such good care of me.” David said, “You just did.” I couldn’t speak because there were so many emotions involved. “Love you Mom, see you in a few weeks” was all I could come up with. Then I had to leave before I had a total meltdown in front of my niece.

Older people do not have an easy life. And while it’s true their children don’t have an easy time either, at least when people talk to us they don’t pretend we don’t exist. So you say to yourself, should we keep Mom restricted and frustrated by not being able to do so many things she loves or do we just say, have a great time, eat what you like, watch all the cable you can (the MARC system does get Matlock!) and enjoy whatever time you have left? My brother and I decided she should just go for it. So Mom, you go girl! We’re just sayin...Iris
Posted by Iris&David at 10:31 PM