Leave it to the French to describe a 53-47 election as a Landslide. I suppose it could be considered a decisive victory, but Landslide? Not sure. You have to remember, and I’m sure you don’t, that when Giscard won in 1974, he beat Mitterand by something less than a sneeze. I believe in the final runoff he had something like 50.81%. That means that in defeat, Mitterand nearly nailed it himself. When people talk about a big win as 53-47, I have to remind them that if you line up ten people in a room, like you might at a Student Council meeting, it would be impossible to describe that victory as anything other than 5:5.. Even twenty people, it would be 10:10. See what I mean? For all the talk about a big victory, you really have to put a LOT of people at the table to show what could be construed as a victory.You need a real crowd.

In fact, I’m always amazed that the elections are so close. You end up, most of the time, with fiftysomething to forty something, and its rare indeed when its actually as much as a 3:2 ratio. And in the Student Council model, you end up with a nearly even house. In the most recent US elections, it goes without saying that its nearly a toss up. How does that happen? Are we really so easily divisible into two groups, and if we are, how is it that those groups are nearly equal in size. The curious thing is, that given how many jerks are in politics, we don’t have more 70-30 or 66-34 counts.

In High school, I ran for Student Body President, and while I cannot imagine they did it now, at the time, the ‘authorities’ deicded only to announce who won. They didn’t announce the vote. Freaked me out. Still does. I mean, out of 1500 votes, did I really only get 85, and they were trying to shield me from such ignominious public humiliation? I don’t’ recall the administration of Olympus High being quite so humane. They ran a good school, and now, I suppose, given how ‘bad news’ is kept from most children, they’d definitely want to shield the poor child from the vicious truth. 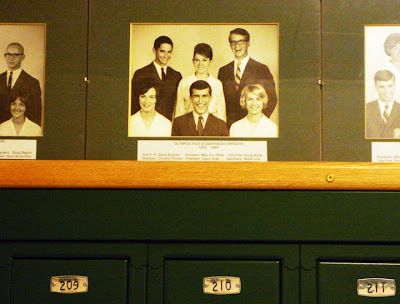 David B (on left, in role as 2nd Vice Pres.)
The truth is rarely a bad thing, however. And shielding a youngster from truth which might be considered grim, while it might be a very New Millenium thing to do, wouldn’t really protect the child, and might even make growing up a more unseemly experience, since their view on reality would be tainted by adult intervention. I think we probably shield kids from too many things already, and reward them for things which aren’t worthy. Everyone gets a medal for just showing up. What does THAT do for excellence. In the mind of the winner (and there should BE a winner) they’ll perhaps know. But excellence should be rewarded, and now it seems watered down with ‘you all did so good, just by being here, you all get a commendation.’ In Vietnam, I remember a picture of some sergeant giving an award to a REMF guy ( loosely translated as “Rear Echelon M___ F____) and explained it with the statement that “.. anyone who stays here a year SHOULD get an award.” Maybe so , but it isn’t lost on the people who really do deserve recognition. At Olympus High, we had a rule that the loser of the Presidential final would become 2nd Vice President (should the President and Vice President become unable to fulfill their duties…. i.e. should they get ripped at the Winter Formal, and fall on the ice in the parking lot) the 2nd Vice Pres. would take over. The major thing I tried to do my Senior year was to pass an amendment (unsuccessful, in the end) to abolish the position of 2nd Vice President. I tried using the “who wants a Presidential reject” argument. Didn’t fly. So, as far as I know, they still have a 2nd Vice President at Olympus, and he or she is waiting for the higher highers to slip and fall on the ice. In France, now it looks like Segolene Royal, the woman candidate who proved that women candidates don’t’ automatically get the feminine vote, can go back to baking cookies (biscuits!) and telling people that they “wouldn’t ask that question if I were a man!” Bravo to her for having run, but too bad she was so disorganized not to have made a better run at it. Sarkozy, the winner, is the sun of Hungarian refugees. It’s almost like the 1700s. Though instead of a royal marriage across country lines (Marie Antoinette/Austria w/ the Dauphin/France) , the people actually got to choose him. Maybe Segolene could become the 2nd Vice President. She’d have plenty to do in reorganizing French election laws.

It's amazing how high school shapes and haunts us.

But one thing I learned from student body elections (popularity contests that end up being meaningless 'cause the adults weren't going to let the elected DO anything), is that it's too bad there are no adults to tell the adults we elect to Washington that they can't do what they promised.

High school taught me nothing about the French.

Google is having its usual morning of we don't know Walt!

And the consequences can be long lasting. When my friend Joyce ran for student government President one of the former officers (Now a famous Broadway actor and director) illegally campaigned for her opponent. It's been over 40 years and everytime she sees him she admonishes him like it happened yesterday.

I tried to run for class president in high school. They told me I couldn't because I had 72 detentions on record.
Bastards.

Ah the French! What wonderful heart warming ego stroking things can you say about the French, that they havent already said about themselves?

Personally I think the french language came into being as part of an elaborate plan to ignore the rest of the world. I hate loving them, and love hating them. But who can blame them for being so proud, it's one of the truly beautiful places on earth.

Landslide? Sure why not, pass the Bordeaux.

Of course French Canadians are even more exasperating. I know, I sleep with one. Please don't tell her I said that.Please.

Even our former Prime Minister Pierre Trudeau (French Canadian) seemed not care too much for those folks across the water. Good ole Charles de Gaulle, "Vive le Québec libre"...my buttox.

I interviewed Trudeau's son Justin Saturday, he has recently stepped onto the Canadian politcal stage. Already he has managed to tick off the French speaking population of an entire country. Easily done for most people, but not an easy task for him, considering that he is french. Not quite the unifyer his father was...

Forgiveness is so powerful...it usually means more to those giving it...b/c they can let it go. The one who offended rarely carry's any burden at all.

On a different subject. In todays Army those in the rear "with the gear" get the most recognition and awards, while those on the front lines barely get a glance and awards are extremely hard to come by. Why is this...it may have something to do with how much time is availabe. Those in the rear have the time to write awards. It may have to do with the fact that those AG soldiers are well versed in writting awards and it's easy for them. While frontline soldiers do not have the time, or expertise, experience to write the awards...It also comes down to support from the supervisors....in the combat arms world the standard is higher...while the support world gives out awards like candy.

I somehow believe the French are perpetually pissed anyway. Beats me what they've got against the free world that saved their butts..short memories..