People determine the kind of activities in which they will participate depending on how they like to spend their time. And that certainly is unpredictable. My grandma Sadie, for example, who lived in Jersey City, depending on the season, liked to go to the Jersey Shore and to Florida. While she was there she would entertain her friends – from the stage of wherever she was staying. It was terrific to watch. She told jokes and sang songs and performed without reluctance. Jordan probably got some of her “love the crowd” genes. She had a great voice and quite a knack for comic timing. But that’s not the activity for which I most remember her. Whenever I was visiting, she felt like she needed to feed me. She was living in a hotel where all her meals were paid for, so like all good Jewish grandmas she took food from the restaurant so I wouldn’t starve. But she never wanted to be obvious about the theft so the food had to be something no one could possibly imagine could be taken from the dining hall.

On many occasions she would bring jello to me wrapped in a paper napkin. It was Florida. Need I tell you how much of the jello survived the trip from dining facility to sidewalk meet? For a long time I thought only Jewish grandmothers took food from their meal service—hotel or restaurant and saved it for later – not true. 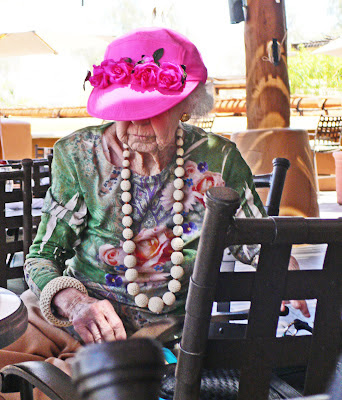 When we were at the Camelback Resort in Phoneix there was an elderly woman who sat next to us at breakfast who ate and then stuffed all her leftovers into her oversized purse – I assume for later or maybe she had a granddaughter who she thought wasn’t getting enough nourishment.

Golf is another very popular activity. When we were kids my Uncle Phil would take us to hit golf balls. That was a great deal safer than taking us out on a golf course—accidents were less likely to happen. Stevie and I got very good at hitting the balls great distances but we never had a chance to go out and play with the big kids. What we did required little skill. 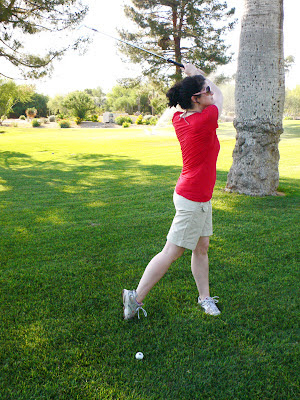 Future PGA champ J. K. Burnett?
David is a pretty good golfer but it is not an activity we do together—until last week when at Camelback we went to the “Pitch”, “Chip”, “Hit”, “Smash”, “Miss”, and Putt, course and played three short holes. It was a colorful activity. Jordan’s first attempt hit a tree and ricocheted, so as to almost hit her in the head. I had trouble even hitting the ball—let’s be honest, that ball is just too small to be taken seriously.

Chuck and Stevie, spent many hours playing pool in Aunt Sophie’s basement. They got pretty good-- Chuck was better, but we all had a talent for hitting that ball. Maybe size does count. I haven’t played in years but last week, while we were in Colorado Springs we found a pool table and with Jordan and Chuck on one team, and David and I on the other we played three games. They whipped us. Chuck kept encouraging Jordan to smile and breathe, which she did (“S and B, S and B”), and they defeated us three to zero.

As I mentioned a few blobs ago, we went to the Grand Canyon and Sedona. So in the Grand Canyon our activites were limited mostly to sight seeing, but in the GC or the Canyon as they say in Arizona, we spent a good amount of time riding in the car (singing only a little) but listening to books on tape. 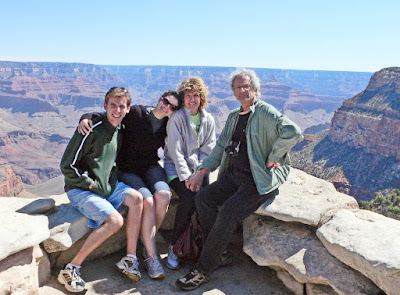 In Sedona we stayed at a resort, so we swam, lounged, steamed, read, watched sunsets, showered, (the kids are big on showers) and played a little table tennis. David took the kids on a hot air balloon and he’ll blob about that. We also shopped and walked and walked. Sedona is gorgeous, and so it’s quite overbuilt and there are 200 too many T-shirt shops, but we had numerous laughs and we were all very clean. At the Tlaquepaque shopping area, 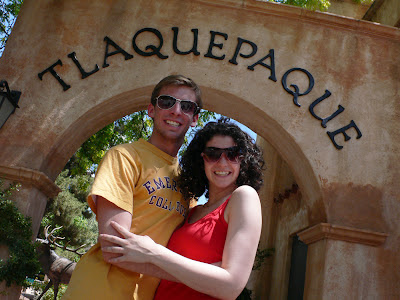 JK and Ben at Tlaquepaque
a newly retro (Neo-Olde?) project with plenty of stairways, balconies and arches. Jordan and Ben would craft a scene for each: West Side Story, Evita, Wicked. It was a short course in Broadway.

When we left Sedona we drove to Scottsdale, (Desert Mountain) to stay with Chuck and Eileen. I’m not sure if just being with family is an activity but in the Dubroff family it should be. Maybe, if you are following our blob, you know that many of our adventures have included being with family, who have traveled great distances just to share some fun. Like when we went to Denver to open “The Gefilte Fish Chronicles”. We had about 25 family and friend who accompanied us and they didn’t come from Colorado—they came from NY, Utah, NJ, Arizona, Virginia, and other parts unknown. Anyway, we visited Chuck and Eileen for dinner and an overnight. It was terrific. They invited friends to join us for drinks and for dinner. We had a barbeque and our kids entertained the assembled. But here’s the thing, when you are with people you love—hopefully that includes family—which in this case it did-- there were no pretenses. We just laughed a lot and enjoyed one another’s company. Why can’t the activity of visiting or sharing good times always be that simple.

Today, we watched a video David shot eighteen years ago of a seder—it was the first gefilte fish chronicles. The Aunts, Rose, Peppy and Sophie were vibrant and strong ajnd recounted so many tales of their youth. The Dubroff progeny was young --Jordan was about three, Joy was two, Seth was nearly seventeen, Adam was nine, Deva, maybe 11. Matthew, brought his intended, Shirley, to introduce her to the family. Andi and Honey discussed the impending nuptials of their children, Micki’s then boyfriend, who has since passed away, was a part of the picture. Michael was healthy and clearly a super supervisor. Debbie was pregnant, Joanie reluctant to be in the film and Uncle Moishe anxious to get to Temple. Aunt Helen wasn’t there and we still can’t figure out why—although Uncle Phil was still alive so maybe he was sick. There is a wonderful moment when Elaine, who died much too soon, tastes the horse radish and is unable to breathe. It was a time when we all were still connected. There was no animus and certainly no unfortunate misunderstandings. I guess there was a time when we were not so determined not to forgive. There is a simple sadness for me in remembering what was and a hope that maybe, for our children, being with family is an activity that can be important again. We’re just sayin...Iris
Posted by Iris&David at 11:50 PM

Being with family is the 'bestest' of all activities when you can..Are we there yet?