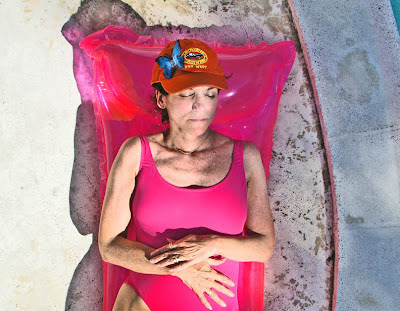 I fly like the wind. I know, you’re thinking, what the hell is she talking about? Is she on a plane? Does she have a new kite? What?

I am in Key West. Going to Key West is something I do every year. I wasn’t sure I would be able to make the trip this year, given my mother’s tenuous health and living arrangements, but David and Jordan insisted I go. 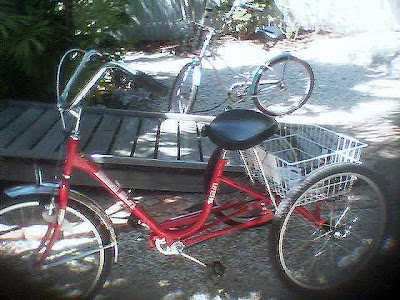 The Trike in Question.
Soozie has a house on what we call the ‘quiet’ side of the Island. There is no honky-tonk in this neighborhood, but it is close enough that if we are feeling like sleazy is where we need to be, it is only a walk away. David and I had been to Key West a few times. But after Soozie’s husband Jeff died, seven years ago, she asked me if I would go back with her to help her through what was bound to be a difficult time -- The reentry into a life shared, as a single person. The first few days were a nightmare. Not because Jeff was gone (although that was hard enough), but because the not so good friends, who invited us to stay with them until Soozies house was ready, really didn’t want us there. I don’t have any idea why they extended the invitation except to be able to say, ‘look what we did for Soozie.’ You know what it’s like to walk into a room where you know people would like it if you did not exist. I mean they did things like not let us take phone calls because it was disturbing their dog—at 2:00 in the afternoon.

Nevermind. Luckily it was only a few days and then we fled. I don’t think she ever talked to them again and when we saw them on the street, they would cross to the other side. They were the antithesis of the people I have come to call my friends in this extraordinary paradise. And let me tell you about the friends.

When I arrive at the Key West airport Stevie, a lead agent for American Eagle, (they are so lucky to have him), gets on the plane and before he allows anyone to depart the aircraft, he welcomes me back. He actually announces my arrival. That’s the good news. The bad news is that every tourist on the plane now thinks I can give them insider info about the Island, so they surround me and shout questions while I am awaiting my luggage. Soozie comes to collect me and we drive to her house, where I start to decompress. I usually take the same flight which gets in about 2:45 and we’re home by 3pm. At around 5 we start to ready ourselves for cocktails at Louies Backyard. It’s a colorful bar where you can watch the sunset and order a mojito—which you will not get because they never have any mint. Our friend Marian, who loves a mojito, knowingly brings her own mint. .After the sun sets we decide on a place for dinner-but it is never planned. There are never any plans in Key West. Things just seem to happen. 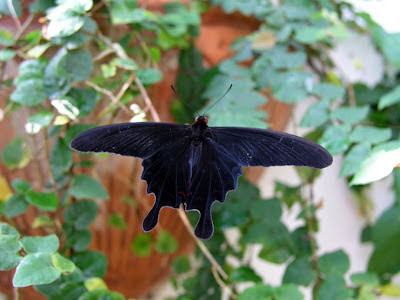 The Butterfly tent is filled with beauties like this one
In the morning I ride my flashy red tricycle to the beach and I walk for about two miles. Then I head back to the house to pick up Soozie and the puppies and make our way over to the Coffee and Tea House—I think that’s the name but I’ve only been going there for 7 years and I’m too embarassed to ask. Paul and Stevie are usually there and we spend about an hour bitching about the country and the government – a world so far removed from this place it might as well be another planet. By 9 it’s time to start what will be our day. 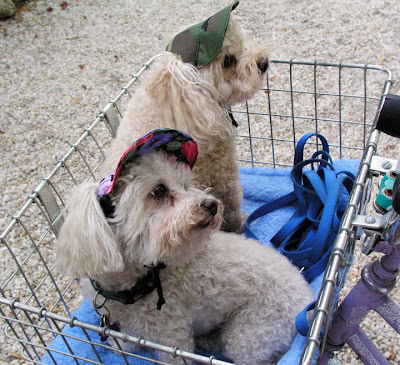 Bubbie and Pearl, in their bike basket
But what does that mean? It usually means a ride to the “Last Flight Out” a t-shirt shop owned by my beloved colleague and friend Clay Greager. Being with Clay, who is one of the great writers and philosophers, is always entertaining. Clay and I wrote a book called “So You Think You Can Be President? Well Take This Test.” We wrote it by e-mail over a six month period. He was pissed off about something Bush did and he e-mailed me to say he thought I should be President. I e-mailed back to say I couldn’t pass the test. He e-mailed me to ask if there was a test. 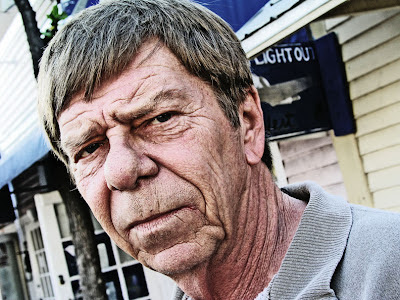 Clay in front of Last Flight Out
I e-mailed him to say I didn’t think so, but there should be. He e-mailed back with the first question and said ‘let’s write the rest of the test.’ Which we did and it is hysterical and if anyone out there knows a publisher, this could be an enormous big selling ‘point of purchase’ hit. Anyway, sometimes we just talk, sometimes we have coffee or lunch and sometimes I just watch him interact with his customers—his wit and insights are breathtaking.

By now it’s sometime in the afternoon and maybe Soozie and I sit by the pool or go to the Butterfly Conservatory, or do some work or shop or meet other friends, and then it’s almost time to get ready for Louie’s. I don’t know where the time goes but without having made one decision, it seems to be tomorrow. 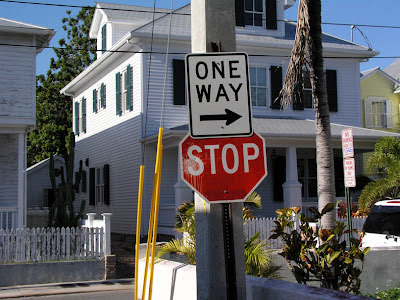 And then my Key West time is up and I fly like the wind to the MoPed Hospital where I sign the charge for the hot red tricycle, walk back to Alberta Street where I pick up my bags, and we head for the airport, where I begin to transition to real life. What a shame that time away from the way we usually spend our days is never real life. Maybe we should rethink the way we fly. We’re just sayin...Iris
Posted by Iris&David at 12:55 AM

Escapism from 'real life' IS NOT A CRIME, so look upon this as the best possible medication, in light of recent events. As for the so-called friends that have you over, not wanting 'you', but expecting praise..just shows they're self-absorbed, and know nothing of sacrificing for a friend. On the brighter side..how great it is that you were announced;now you know of a probable sideline as a KW tourguide!(just kidding). I believe I speak for many in saying,"Glad you had a recouperative trip!"

No problem, and as always..no charge..But you 'might' still need that asprin in the morning..

Next time I will go visit Clay and his T-shirt shop. I'm sure we will become friends too.
Mike