Iris:
Over the past few days we have been having a wonderful time. Who would ever have guessed that after years and years of establishing ourselves as notable journalist and communication strategist, our fame would come from a fish story. But it has been so much fun we hardly notice an absence of political acumen. 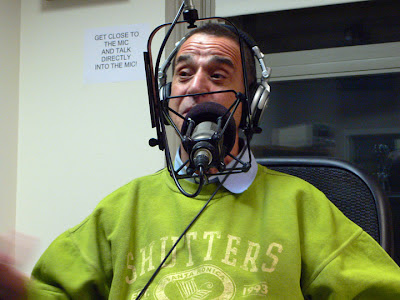 ...On the Joey Reynolds show....
Last night we were invited to be guests on the Joey Reynolds show. If you’ve never heard Joey he’s quite a NY character with a pretty big following. Friday night is his ‘Jewish hour’ show. Last week we were in touch with his producer, Myra Chanin, who is a star in her own right. Her cookbook “Mother Wonderful’s Cheesecake and Other Goodies,” and her books about her mother, are hysterical. She was generous in the time she gave us and a wonderful addition to our segment of the show. 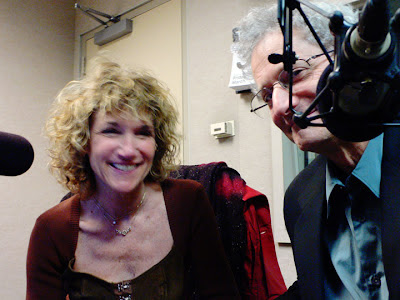 The esteemed US at the Esteemed Joey Reynolds microphones
There are “Jewish regulars” who appear on the show weekly but they were stuck in traffic because there was an accident on the ramp of the Lincoln Tunnel, which tied up traffic in the City for hours. We were very lucky in their delay, because apparently, the regulars never let anyone else talk. So Joey had only us to talk to—and we were very entertaining. I have the CD if anyone wants to listen. We brought horse radish and matzoh for Joey, and everyone was blown away by how hot it was. What can I say. We were a hit.


This morning, while I was at a creative meeting for BreastCare, David called to say that the New York Times had reviewed the show. What a Valentine. You can read it here.

Being in the NYTimes is really a trip. It’s hard not to tell everyone you see. So when I finished my meeting I got a copy of the Times and immediately shared it with the concierge at 55 Wall Street, where the meeting had been. “See this” I said, “This is me” She thought it was very cool and we high fived. I shared it with people on the subway and on the street. Yes, it was a bit presumptuous to be waving the paper in peoples’ faces, but it was too much fun to stop. 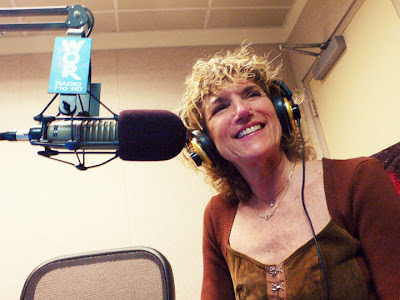 I met David at the Comfort Diner on 45th between 2nd and 3rd. one of our favorite places and David showed it to the waiter who showed it to the owner, who gave us a Comfort Diner cookbook. We promised to send him “The Gefilte Fish Chronicles Companion Cookbook”, so he would not only be able to cook comfort food, he would have access to cooking from all the brown food groups.

David: There is a big difference between having a credit line in a publication, and being mentioned in an article that publication writes about you. I have been published in the Times and the Times Sunday Magazine over the years, and for the most part the reaction is a very quick high, followed by a quick tempering of the joy of seeing the credit line, and usually, within hours, you’re back to where you started the morning. Today was quite unlike that. I sent a DVD review copy of the Gefilte Fish Chronicles to the Times TV reviewer about three weeks ago. Normally its like tossing it into a long dark tunnel. Seldom does the response come back right away, if at all in situations like this. I suppose if they feel it necessary to ‘ask the director’ something about the production, motivation, or some other minutiae, you might get a call. But this was just one of those times when, as the WNET/Ch. 13 broadcast date (tomorrow, Sunday, April 1, 7pm) approaches, I’d hoped we might get a mention. When I logged on this morning, I had two emails from friends offering kudos for the review. I immediately found it on the Times site, and it was as much fun seeing it online, as it was later, holding a paper in my hot little hand. I shared the review with the booth next to us at the Comfort Diner (“… I don’t usually do this, but TODAY, my wife and I are reviewed in the Times!”.. ) and they kind of dug it, too. It has been fun hearing from several friends who saw the paper long before we did. There was that faint air of similarity to Burt Lancaster’s character in Atlantic City, the old retired gangster who, as he passes the wretched front desk of the crummy motel where he lives, sees on the old black and white a news piece about a murder, and is compelled to share with the desk girl .. “ I did that.!” Last night’s trip to the Joey Reynolds show was a trip in its own right. More kachers have sat in front of those microphones than you can imagine. Sitting next to me was Mickey Freeman, who once played Private Fielding Zimmerman on the Bilko TV show, and who was has been a comic for six decades.He sat next to me with his jokes scribbled on 3x5 cards, shuffling them as the hour went on, keeping the fresh material. (“I had a booking – 9 days at Mount Sinai! I had such a rare disease, they didn’t have a FEE for it yet…”) Pure borscht. 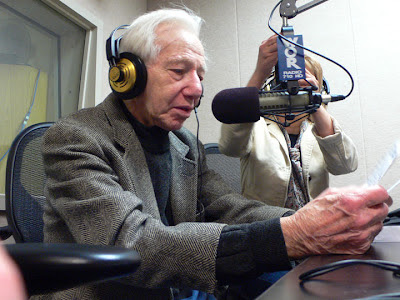 Mickey Freeman, at the mike
Well, actually the Borscht was in the horse radish which the Joey Reynolds team kept (against our advice) sniffing. Ouch. It will burn your nose, people, so be careful. So night has fallen on Gotham City, and this morning’s New York Times is starting to be used to wrap fish and other trash. Tomorrow there will be another paper, and our review will just be a little noted moment of journalistic triumph. But the best of all is the fact that I’m called the Director. The Director of a documentary about a family which cannot be directed. Not bad. No, I mean it. YOU try directing that family. Can’t be done. All you can do is try and keep up. And keeping up isn’t so bad.
We're Just Sayin' .......
Posted by Iris&David at 8:15 PM

I grew up listing to Jean Shepherd on WOR. I never bought an ornatholpter.

Wow, the two of you were on WOR.

Now to the NY Times review. For me this says it ALL:

The program has all the production values — and all the warmth — of your cousin’s wedding video, although, at just under an hour, it’s blessedly shorter.

I loved hearing it fly around the WOR studio crashing into things.

Congrats, that kinda publicity must make it all worth while.
Big Jewish community in Toronto and Montreal,David and Iris. The public station in Toronto is TVO, don't know about Montreal. Hope to see it up here.

In radio, as in most media,timing is EVERYTHING. I am very glad this worked out in your favour..and yes..I have tried to direct a family that couldn't be directed..Seems I probably shoulda snapped the scene slate on my sister's nose..But seriously..Good for the both of you! Best wishes, Walter.