In Praise of Braise

When I look back at the menu which my mom, a consummate woman of the 40s and 50s, raised us on, there were a few things which stood out. We did pretty good at breakfast (my dad’s diced fried spam in scrambled eggs was a treat to behold), lunch was never a major hit (I do miss those chopped black olive & mayo on Wonderbread sandwiches), but dinner was, for the 50s, pretty good. There were a few dishes that I never quite got. Mom had an electric range (we lived out in the sticks, and were lucky to have electricity) so the broiling all took place with an electric broiler on the left hand side oven. The heat was quite intense, and on those cold Utah winter days when the oil furnace would go out, mom would turn the oven on, and open the oven doors to let some heat escape into the part of the kitchen where we kids were hovering. In her repertoire, I guess as a spill over from her youth, she always included calves liver and kidneys (ah, that would be two separate dishes on two separate nights). Her broiling pan was a 12” pie tin which looked as if it had been a test plate at the Alamogordo A-bomb tests. Gnarly, black, lacking a single flat surface on any side, it may well have also served time as the hubcap which kept flying off the Keystone Cops Oldsmobile in a 1923 movie. The mere sight of that pan instilled the same kind of dread that a visit to the dentist evoked. The dreaded organ meats would make their appearance, and we would, using knives not sharp enough for the challenge, try and wrestle and subdue them on our plates. I think I must have felt as if kidney was a direct test of will: that if you could somehow manage to eat some of it, you would be rewarded on Friday nights when she would make a big Porterhouse or T bone steak. Those were always delicious and dad would slice it perfectly, and serve each of us from both sides of the bone. It remained in the Burnett household, for decades on, a joke about when WOULD we be old enough to cut our own steak. Occasionally we’d have either pork chops or spareribs, served the one way mom knew how to do pork: slices of lemon, and salt and pepper. This was well before the concept of dry rub, or Cajun seasoning had arrived in Utah. Well before. Both of these porcine specialties required a pretty good knife to get through. There never seemed to be any tenderizing involved, aside from a sprinkling of Adolph's. (For those of you under 50, Adolph’s Meat Tenderizer was the first incarnation we had of MSG. The current formulas are happily MSG-free, but half a century ago, no one worried about these things.) Food (as we called it then) has really evolved in the last fifty years, and happily so for the most part. Now we call it cuisine and enjoy the multiplicity of goodies available on every corner. I didn’t mention pot roast or brisket, or even roast beef. Those were always well turned out, and each became an incredibly successful candidate for those next day Wonderbread sandwiches, the ones that defined a generation. The long stewing, long roasting meats are, in some ways, among the easiest things to make. But there is a richness to the carmelizing that goes on which makes for heavenly meat.

The last few years my interest in a meat form long neglected in this hemisphere has grown with a fever pitch. If you have spent any time in Korea, you know the magic of Kalbi. Kalbi are the Korean bbq version of Short Ribs. In the 70s when I made a lot of trips to Korea, Kalbi was one of those great new flavors which grabbed my attention. Marinated in soy, sugar, sesame, garlic.. lots of garlic, pepper, and a half dozen other spices the meat is then grilled. The Korean key to short ribs, is the way they cut them. Zig Zaggy cuts are done parallel to the bone, interleafing the cuts in a way which lets you lay the meat out, almost flat, It means that all the meat is subject to the flavor of the fire and marinade, not just the outer edges. It cooks quickly, and makes Korea a serious contender for the next time they have a World Series of Barbeque. But the rediscovery of Short Ribs, and things you can do with them, well, it makes it a great time to be alive.

About two years ago I had a wonderful lunch at Tenh Penh, the moderno-Asio-spicio place in downtown DC. The Short Rib special that day (which I had spied on another diner’s plate while doing my “I must be lost, so I have to walk through all the aisles to get to the restroom” recon trips)was nothing short of sublime. Short Rib, huh? Well I knew it as Kalbi, but like so many things, certain cuts of meat, veggies, etc., just don’t make it mainstream everywhere. And when they are rediscovered by talented chefs, it’s a wonder to behold. Now I’m always looking out for a short rib on the menu, no matter where I go. And they keep popping up.

The other night I decided to try it myself. Iris was driving back through the snow from Jersey, and I was able to work unfettered all afternoon in the kitchen. Well, not all afternoon, exactly, but for an honest four hours. It was fun. The first sizzle you get when you put the meat in the hot oiled pan to sear it is a treat in itself. From that moment on the smell and sounds contrive to make a little sensory cheerleading section. I browned all the meat (this recipe was from the Silver Palate cookbook) and then laid it all out in a roasting pan with crushed (by hand) tomatoes, garlic, a mushed up hot pepper, plenty of salt and white pepper, and a celery stalk. Covered with foil, and let it do it’s braising thing for a little over 3 hours. When I pulled the foil off for the last 20 minutes of cooking, even the foil was a visual treat. 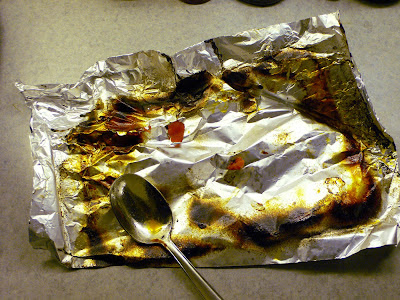 The foil used to cover the Short Ribs - a piece of modern Art all unto its own
There is something wonderful that bubbling liquid does to the meat. It remains brown but softens up and becomes so tender that it’s a chore to keep the meat on the bone as you transfer it to a plate. But what a pay off. The slow cooking thing really does it for me. There is an earthy richness to the succulent meat and for me, few dishes will come close to the almost sensuous nature of these ribs. It’s so different from barbequing pork ribs, or even big beef back ribs. The short ribs, (and I have no idea what part of the bovine they come from ) are their own reward. I praise the braise, and suggest to you that there few better ways to cook than to set up a pan of short ribs, kick back with a good Bogie or Thin Man flick, and know that when Mary Astor is ‘sent over’, the payoff dinner will be ready. We’re just sayin... David
Posted by Iris&David at 5:51 PM

Envious of the Korean trips. Worked in KoreaTown and Chinatown in Toronto for years. Had lots of chances to go to Korea but never took them, a big regret. Nobody does BBQ like Koreans. Kalbi, Bulgoki...mmmmmm. And the nicest folks in the world too.

I think our childhood dinner tables probably looked similar. I grew up on a farm and if you didn't eat meet you wern't a good farmer. This was long before soya beans. Meat was meat whether it galloped, moo'd ,hopped or oiked. Braised, fried,smoked or boiled(yes boiled,mom was a Scott).

I would be petting one of the livestock during chores and my father would say to me "I wouldn't get too attached to that one."

Mom was a reasonable cook so I never really minded seeing one of my childhood "pets" on the dinner table.

Although, I did get a little uneasy when my pony went missing.

Now I have to drive two hours to get some Kalbi and Kimchi...thanks David...40 dollars of gas for a 5 dollar meal...

Do you have the ISBN number for the Silver Palate?

I guess meant "patting" the livestock ,not, "petting" (as in heavy)...Dont need any visits from the SPCA.

Oops, the cook made a small error: It wasn't, strictly speaking, The Silver Palate, it was the New Basics Cookbook by the same two ladies, Julee Russo and Sheila Lukins of Silver Palate shop (columbus avenue/NY) fame. page 159 i think.. Savory Short Ribs..Isbn:
9-780894-803925

Thanks will Amazon it, pronto!
michael