More Than the Speed of Sound 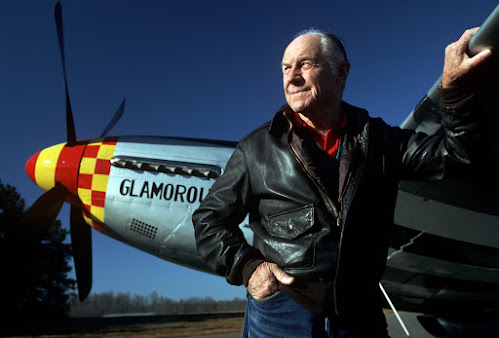 As you start to become a person about whom it can be said that you are 'of a certain age,' the definition of "certain age" can take on a lot of different meanings.  We spend so much of our lives imagining that we might live to a ripe ol' age, and barring accidents and illness, we just might.  But in a world where the news is instantaneous, a mile wide and a half inch thick, the passing of notables is something which briefly grabs our attention, usually very briefly, and lets us reflect on their lives and contributions.  Sometimes the contributions are concrete - discovery of a star system, or creating of a vaccine against a raging disease. Other times it is a bit more metaphysical - just try governing a country with 400 cheeses.  I remember how in his late 70s my dad started to get tired of his friends passing away - golf buddies, friends from the jewelry business. He just didn't want to think about it after a while.  I have always thought it might have something to do with how we acknowledge that in our friends, we see ourselves, and start to feel our own vulnerability, and mortality.  This week with the passing of former French President Giscard d'Estaing, and General Chuck Yeager, we see two notables, their life's work now ended.  I spent a lot of time photographing VGE during his 7 years presidency, and it remains a memorable time for me, especially when I see the ridiculous moustache and hair I was sporting in the 70s.  (What was I thinking?)    In the 1990s, at the apex of my advertising career, I photographed Chuck for ROLEX.  (Yea, my dad worked for OMEGA for years, but hey, business is business!)  Most of the people I photographed for ROLEX (Cynthia Gregory, Placido Domingo, Picaboo Street among others) were top-notch, easy to work with, and considering that there was nothing to look at on the back of my camera except the tab from a film box, very patient.  (That's why we had light meters!  Try it sometime.)

With Chuck, it was agreed that we would all meet at an airport in central Florida. "We" meaning Chuck Yeager, my art director, the guy who owned the P-51 (painted to resemble Chucks WW2 plane, the Glamorous Glennis) and the account rep. (The account rep is the person who handles the $3000 watch during the photo shoot, though in this case, I think Chuck brought his own.)  It was a crisp mid morning light that graced us, and as usual I had no assistant, no lights, no nothing. Just a chance.

We shot in front of the wing for a while (the ROLEX ad), then as he slowly tired of the moment, moved to the back othe plane where he could throw a glance up at Glennis' tailplane.  It was all over in 20 minutes or so, and afterwords, sitting in the car, I made damn sure every roll of shot film made it into a  caption envelope.  The stuff was treated like gold. 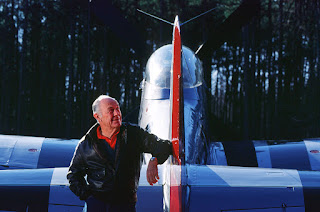 We sometimes have this passing moments when you are in the company of greatness. It's never really been my way to ask for autographs, at least for myself.  But merely breathing the same air as VGE or Chuck Yeager, or any of the last ten Presidents, lets you share a moment to which you hope you can add a photograph, or two.  Those are the momentos, those are the autographs.  It's a gift to be a photographer, and one which we don't take for granted.  We're just sayin'...David
Posted by Iris&David at 10:42 PM