A DMZ Christmas 50 Years Ago

Back in the early 1960s, in the wake of Sputnik and such fanciful terms as "the Space Race," the "Missile Gap," and Pupnik (Sputnik 2 carried a little Russian terrier named Laika), and, in the words of one of the old geezers (gee, he must have been at least 50!) at Jack's Barber Shop on Highland Drive, "if they can put a dog in space, they surely can send a missile over here." When you're 12, and sitting on the wood board the barbers used to elevate children in the big (and mechanically quite amazing) 'barber's chair', words like that from the geezer seemed to carry a lot of weight. Like all the men in that room, he had unquestionably served 15 years before in World War II, and may have even been a witness to the sound, light, and destruction show known as Stalin's Organ. ( A multiple tubed rocket launcher which fired, depending on design, up to 4 dozen rockets all at once, a blizzard of terrifyingly howling explosions and noise). Post Sputnik, when the US briefly expressed regret that the Soviets hadn't waited until early 1958 to celebrate IGY (the International Geophysical Year, a period of joint exploration and research) but had just gone ahead and launched their first satellites without waiting, wanting to let the world in general, and the US in particular, know that their science was as good as our science. It led to a remarkably nimble jump in American education: all of a sudden the late 50s and early 60s were producing one advanced science or math program after the next. I was pretty good at math, not bad in science, and from '58 onwards thought I would be spending my life building rockets for the US space program. The new programs were innovative (I remember the 8th grade Math workbook, created by U/I Champaign Campus) and we students felt pretty juiced. I even knew what integrals and derivatives were, long before those words became popular in the rest of society. (And today, I know they exist, but remain incapable of even describing them.) I was in AP Math the whole of high school, and Mr Barton, the much beloved math teacher at Olympus High School, was our leader. He'd flown helicopters in Korea, and applied many of the little things he learned to math in general, and life in particular. He once described the subtle talent needed to fly a chopper. "You can't," he said, "actually MOVE a control on a helicopter." That would be too much. Over correction. You just have to THINK about it, and that will be about the right amount of pressure." Stuff like that, uttered in a flurry of theorems, has stayed with me for these 55+ years. Most of all, he implored us to slow down, and to "think clearly." For years, on the back of my Nikons, in the 70s, with the arrival of the Dymo label maker, I had the words "Think Clearly" sitting just below the viewfinder of my F and F2s. Our little home room Math class was full of geniuses: Don, Diana, Randy. We were only about a dozen in the class, but we knew we were lucky to be there. My senior year, I placed 11th in the State Math Contest. Not bad, you say, and I would have to agree. But in fact I was only 4th in my Home Room. Yea, it was that kind of crowd. 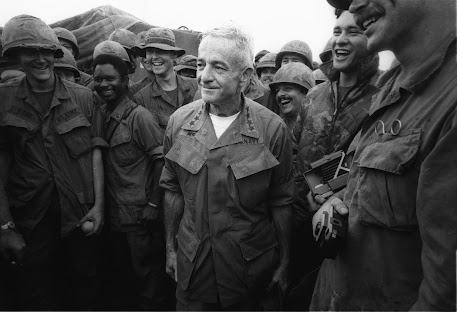 Admiral McCain (CINCPAC) Christmas 1970
The young soldier who found himself in my picture, Terry Knox, also gave me a gift, 45 years later. We spoke of all those things: being a grunt, Con Thien, the unlikelihood of being chosen to attend the show, his great surprise years later at realizing he was IN the photograph I'd shot. When I had a job in Illinois a couple of years ago, he drove down, and we had a coffee, a catch up, and a very big hug. Sometimes those hugs are really the grist of what we come to appreciate in this life.
I am constantly amazed at the reach which the internet has created, even for those of us who were really lousy caption writers. One of the assignments I did for the weekly paper - The Rocky Moutnain Review - in Salt Lake in the summer of 1966 was to spend a part of an afternoon at Ballet West, a company of talented dancers under the direction of William Christensen (even 54 years on, I remember his name without having to look it up!) During that afternoon session, a couple of rolls of Tri-x (in the era when there wasn't a story you couldn't DO with a couple of rolls of Tri-x!) I photographed a young dancer at rest, at the barre, on point, and looking like a cocked slingshot, ready to be fired at a passing mailbox. We never spoke (yea, that's a whole other essay) but I found her visually charming, adorable, and eminently photogenic. I got her name, we ran a picture - or maybe a couple, I don't remember, a week later, and I felt like I had actually come up with a cool picture just by being there, and looking around. Looking around is the key. My old pal Joe Cantrell, who had Cherokee blood in his background, had taken a name which I have always felt perfectly summed up our mission. In those moments, he would call himself "Walks Slowly, Looking." It is what we do, when things go right. 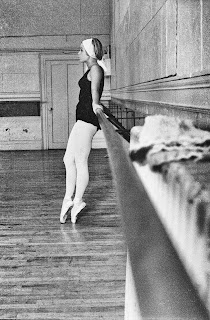 Suki Smith / Ballet West 1966
photograph ©2020 David Burnett/Contact
So my picture of young dancer Suki Smith ran "not quite as big as I would have liked" in the Rocky Mountain Review, and for 54 years that was pretty much that. Then a couple of months ago my brother in law, Larry Cofer, newly armed with an Ancestry account, tracing his own families' story as well as ours, took a minute to look for my dancer. It became a long and not uncomplicated process, but at one point I found what looked like a connection to her, and wrote a note on FB. (I always look for the first names that are the least common. That gives you a chance, at least.) And tonight I received this message:
"Oh my goodness, this is amazing! Suki is my mother & was still dancing up until a few years ago. Thank you so much for sharing this with me."
Photographers view the world slightly differently than most. We see, we stop and look, we notice, and above all, we try to take that wonderment of what we see, and preserve it, to give it a fuller, extra life, one which we hope can be shared. Pictures tell their own stories, and when they give you a chance to cross the chasm of time, in this case, 54 years, it's like a gift. Photography is.... Memory.
Posted by Iris&David at 9:31 AM