The March of Women 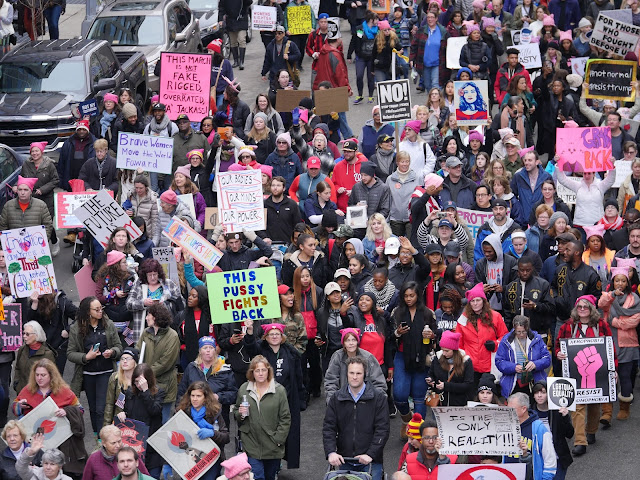 It was my intention to write about the wonderful party we attended last evening. Who doesn’t love Diana and Mallory Walker.  In addition to being gracious and elegant they are the World’s Cutest Couple.It was a birthday party for Diana.  All her and our friends, family and colleagues gathered to wish her continued joy.  That’s what I intended do before “The Women’s March.”

Every group - in New York -  that invited me to March with them (8 or 9 of them), had a different location at which to meet. This was totally confusing and it was unlikely that I would meet anyone of them. So up at 6:00am in DC,  and off to New York for a day that I expected to be a bit tamer.  There was a great deal of traffic, thankfully not going my way.  By the second rest stop in Maryland, I decided to stop. The best way to describe what I found was the time we went  to  Woodstock (yes, THAT Woodstock,) and there was so much traffic we couldn’t get off the Mass Pike.  We just sat and sat and finally decided it was no big deal, so we drove to Wisconsin.

Anyway, there were so many people at the Rest Stop, I couldn’t get in.I don’t mean to the bathroom, I couldn’t get in the door of the building. Truly, I have never seen anything like it. There was nothing to do but try another rest stop. One which was not both north/south — just north.  There was surprisingly little traffic going through the tunnel.  Maybe the March was just hype I thought… until I got to 2nd Ave. and 53rd street, where there police and fire engines - with lights flashing and  sirens roaring - there were hundreds of people milling about and trying to get to the stage.  Some of us never even knew there was a stage, because there was no way to get that close to where the march was to begin.  Yesterday, there was an e-mail that suggested anyone who was planning to attend should try to leave the staging area in alphabetical order.  Oh yeah, that was going to happen.  Half a million people and they were going to depart from 47th street walk to 42nd street turn right and walk up 42nd and turn right on to 5th Avenue - and do it in alphbetical order. Right.  The police were amazing.  When they realized there were as many people walking east as there were walking west, they divided the street, so you had to walk east before you walked west.  What was incredible was that marchers and police remained good humored and happy to be in the middle of women and men who were all feeling terrific. I was with my family by choice, which made it easier to be connected. It was grand.


The most amazing thing for me was that I did not see one person I knew.  After working diligently on Women’s issues for years  — all different areas — health, economics, policies, politics, professional  issues and on and on,  there was not one person in this huge crowd I knew. And yet, everyone in the crowd was someone I knew — young, old, black, brown, beige, yellow, they were all me.  And this kind and size of crowd, happened all over the country, in fact, all over the world.  So how do we take what happened today and make it a permanent and ongoing movement.  First a name that reflects all the themes and concerns, leadership and organizational plans.

Who knows whether it was the speech, the attitude, the extra long  Inauguration program, the campaigns or the Hillary win/loss.  And so Millenials, take it and run with it.  The girls who have been doing it for 50 years will gladly turn it over to you.  But let the people who worked with Betty Friedan and Bella Abzug tag along.  It feels right and in fact, it feels just plain splendid.  We’re just sayin’… Iris
Posted by Iris&David at 9:31 PM