The Last Man: On the Moon 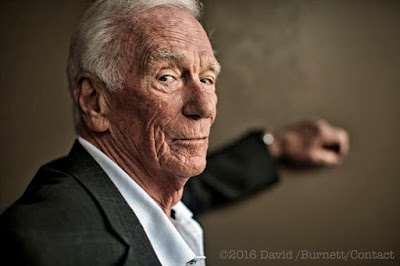 He was a tough guy to track down. I was assigned by ZEIT magazine to photograph the "Last Man on the Moon"… Eugene Cernan was the last man up the ladder to the Lunar Excursion Module in 1972 - Apollo XVII.  It’s hard to imagine now that what would have gone on next  - Apollo XVIII - was cashiered because of money issues.    No man has been anywhere close to the moon since Gene Cernan’s boots left their final mark in that Lunar Dust.  But it was Nixon Term Two: the Vietnam war was still the Vietnam War, and people seemingly had had their fill of Moon Travel.    Cernan had one of those busy lives which ex-astronauts tend to lead, and four years ago when I was given the assignment, to accompany a story by my long time friend and colleague Peter Sartorious (who spent many months at the Cape in the 60s-70s covering the space program), who had warned me that the woman in charge of Gene Cernan’s schedule was a “steel magnolia”(pronounced in about 6 syllables with a heavy German accent…I mean STEEEEEL Magnolia!) The phone call would usually go something like this: Me:  “So, I just need about ten minutes, is there any time in the next couple of weeks that it would work?”  Steel Magnolia: “Mr. Cernan’s schedule is extremely busy…..”     You get the idea.  Well…it’s not what you know, it’s who you know, and in the second month of this back and forth (there was no RUSH for the picture..obviously)  I mentioned to a friend of mine, a philanthropic pal from college who is super interested and involved in aviation and space travel, if he by any chance might know Gene Cernan. It turned out not only was he a good friend, but a week hence, there was a big salute to the Space Program and all the Astronauts (including Soviet pioneer Alexei Leonov) at the Museum of Aviation in Seattle.  Among all the astronauts, John Glenn, who had a previous engagement, was the only big name who couldn’t make it.     So there I turned up a week later, and was introduced to Gene Cernan over a cold beer, and locked in a five minute session the following morning, using the front parking garage wall of the 4 Seasons Hotel as my studio (hey, you take what you can get.)
Once he arrived, en route to a waiting Taxi (I love it when the photo session is during a taxi waiting period…) he was very cool.  You could sense that this was not only a guy who’d been to the moon, but he also had a couple of hundred carrier landings under his belt.  I shot like crazy for my four minutes, trying to catch that edge.  You don’t go to the moon without a little edge in your life.  You just don’t.   I was very sorry to hear he passed away today, at the very young age of 82.  There are only  a half dozen Apollo astronauts left and every day, a little sliver of their knowledge of space travel gets a bit tinier. We’re none the richer for that.   But those guys who rode the rockets: Bravo!!  And the way things are going, it does look as if Gene Cernan will be the Last Man on the Moon for a very long time.    Photograph ©2016 David Burnett/Contact Press Images

David, I remember meeting up with you in Seattle after this shoot. Yep, your memory is working well. Your description here is the same story you told Gary, Joscie,and me.