It finally happened.  Someone told Debbie Wasserman Shultz she couldn't open and close the convention. Or it was perhaps when the Florida delegation booed her in their caucus.  It just seemed to drag on and on.  It was real politics, with no one making the decisions that made sense.  Where is Evelyn Lieberman when we need her. I guess God needed her more. With what's going on in the world, it makes sense. 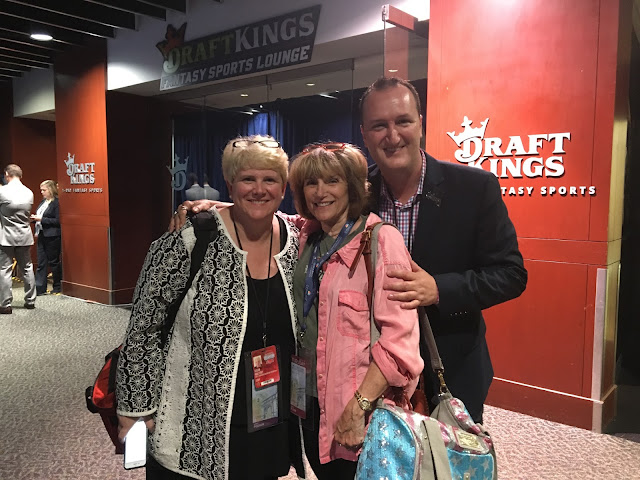 backstage, Philadelphia with "Team Convention 2016"
And speaking of politics, I am on my way to Philly to catch up on the campaign gossip and see who's taking credit for so many things we did in the olden days.  For example, there are now a vast number of people taking credit for the Counter Events Operation during the ’92 general election.  When we designed the operation, no one wanted any part of it because, "what if someone called us the dirty tricks effort."  We never did dirty tricks.  The Clinton campaign told America why he should be president, and we told America why George Bush shouldn't stay in office. We were a carefully crafted effort to make the Republicans responsible for what they did in the White House. Oh yes, there were people dressed as Chickens at the Presidents events, and Pinocchio's and a Harry Truman Truth Squad, as well as the Witch George Bush effort. But we were always respectful to the President and in fact he wrote one of the chickens a note that said, “what you are doing is in the best spirit of American politics. “  Sully and I raised the money and designed what was a successful communication campaign. So now, we will set the record straight and I have witnesses.... No one but me and Sully and Kim and Sue and Caroline and Mark and the comedy writer from all over the country and Alicia and Ron Brown had anything to do with Counter Events.
I should mention that Michael Elliot, a wonderful writer for the Economist who sadly died recently, did write a piece about us -- without mentioning names. We were at Annie Groer’s for dinner and he was so fascinated by what we were doing (Counter Events) , he snuck away from the table into the bathroom and took notes.  It wasn't too long but he got it.  I wish I could find the story.

My latest disappointment is that Conventions just aren't what hey used to be.  OK, it's hard not to be in charge of anything when you are used to being in charge of everything, but that is not the point.  The credentials were very specific. If you had a Guest Floor Pass, you couldn't leave the floor to visit friends in any delegation. And if you have a podium credential, you can get up on the podium but no where else. That's no fun. So I found a place at the door to the podium and saw all my friends, who were speaking from the podium.   That was fun.

For someone who can build a crowd of 100,000, but can't stand to be in a room of more than ten, there were times when it was frightening.  But I lived to see another tomorrow.  And I'm on my way to Chicago to open Gefilte Fish Chronicles the Musical.  Yes, I am torn between my two loves, politics and the theater, and now I realize that there's no reason to only pick one, I can do both while avoiding having to be in a crowd.  We’re just sayin’… Iris