The STORM OF THE CENTURY is over.  There must be at least ten inches of snow, no wind, and the sun is shining. This morning, when I chatted with the children of the Century, they were playing blocks and were building the tower of the Century, which was taller than both of them and almost as high as the snow outside their window.  They did have more of a snowfall and blizzard conditions than did we, but they seemed to have survived.  They wanted to play outside and build a snowman.  When Seth was awake they plan to have him open the door – which they could not do without his brute strength.

We’ve heard from just about everyone, except Tracey and Jack – so give a shout if you have phone service.

As I said before, I am relieved that the storm of the Century is over.  I expected the TV networks to find some other crisis to cover today.  But alas, they love beating the dead horse of the Century, so now they are 24/7 about the after-effects of the storm.  I could write their scripts.  In fact if I did write their scripts, they would be funnier and shorter.  It would go something like this….

“Well folks (that always makes people feel like they are your friend, and you are about to have a chat).  It snowed yesterday.  In some places like New England, they got a lot of snow.  Not quite the hurricane of ’38, but a lot.  Today, it is not snowing.  It’s a little windy, but far as we know, there’s not much to tell -- no one has been killed by flying anything, so we can’t talk about that.  Most of the roads are open, so we can’t talk about serious delays, and it’s Saturday so no one is in a rush to get to work.  Maybe something terrible will happen in the world today, and we’ll have something to talk about. But for right now, be happy and safe, and watch a cable network that has a movie. (That’s another way to seem friendly without intruding).” 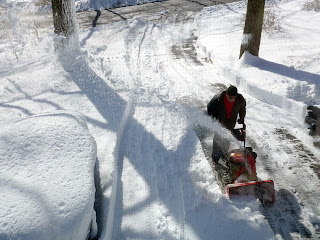 Oscar and the mighty snow-blower

David shoveled the front steps of the century.   He wanted to get some exercise this century.    Our friend Oscar is here snow-blowing our driveway of the Century.  He’s already plowed out his house, his tenants house and he’s on his way to his mother’s.  He’s a wonderful friend and we are grateful that someone has been able to rescue us from one another’s company.  We have not heard about any emergencies.  As far as I know, no one has asked Oscar to deliver provisions, show up with a cognac-laden St Bernard, or leap tall snow banks in a single bound.  People know they will be able to get out of their houses and there will be food available.  Last night there was meant to be a 10 city link up for Colorado College (David’s alma mater) alums, in bars all over the country to watch the vaunted CC-Denver University hockey game.  For decades this clash of Rocky Mountain powerhouses has been noteworthy and noticed.  About 6pm, David got an email advising that “because of the Nemo storm, the get-togethers in New York and Boston would be cancelled.”   David’s reaction was spot on: “How is that POSSIBLE? We’re talking Ice Hockey, not Canasta!!” 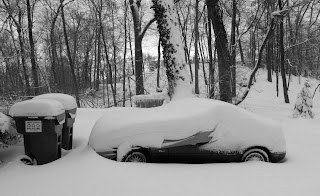 the  poor little Miata, under the Mini cover, chilled to the bone

You are probably wondering why I would blob about a horrible storm that was just some snow.  (Need I remind you that in our parent’s generation, they just called it “Winter.”) Was the storm like a drug and I needed to find a easy way to withdraw from the storm addiction?  No, I was just looking for a way to express my frustration about what passes for the news these days.  If you want some real news, here goes… Once you’ve tasted the grapes of wrath, you’ll never be satisfied with bananas.  Yes, I’ve said it before but not 24/7.  It’s a gorgeous day, we’re going for a walk. We're just sayin'... Iris 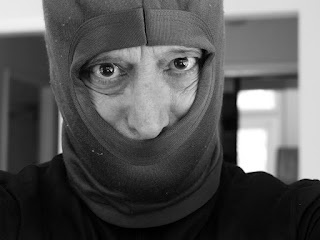 David, with the balaclava of the Century
Posted by Iris&David at 12:55 PM

This gave me the smile of the century...