As I watched the last Presidential debate tonight I couldn’t help but think about another difficult time for our great nation.  A time when it was possible to tell the truth, without first looking at a poll to find out what the truth should be.  A time when there was great clarity in what was right and wrong, what was good and evil and what was fair or at least equitable.

It was a time of activism for young people.  The issues were clear. The war in Viet Nam was wrong.  Women were entitled to the same rights as men.  Demonstrations about    sexual freedom, civil liberties, and human rights were loud, frequent, and public.  But it was not until George McGovern, a grown-up elected official, had the courage to speak out, did our outrage become part of the electoral process.

Senator McGovern passed away yesterday.  He was always one of the good guys. Whether you agreed or disagreed with his thinking,  you had to respect his courage and commitment to ending a war that so many people felt was wrong. He was enraged, not only by the war in Viet Nam, but by the war against anyone who disagreed with the government.

When I met Senator McGovern and his wife Eleanor, I was young,  pregnant (early stages) and teaching at Boston University.  He came to a rally on which I was working, but who remembers what I was doing.  Everyone who came with him was enthusiastic and totally focused on the importance for the universe to change.  Most of the McGovern staff in Mass. was younger than me, so I felt very grown up and in charge… which I can assure you, I was not.

Anyway, the staff liked me and knew I had a constituency (the students) they needed and so I had a meteoric rise from volunteer to Senior Staff (who still  didn’t get paid).  The tasks I performed for the campaign were mostly as an advance person.  There weren’t many women who did Advance in those days.  ‘Not many’ doesn’t begin … but three is not many.

As you may or may not remember, Senator McGovern was not elected.  But we did win in Mass., so we never considered  that Presidential election a loss.. And certainly the Senator was never a loser. It was my first campaign, and although I didn’t travel out of state, all of the McGovern people knew one another or, at least knew about everyone else who was working – no matter where in the country they were.  And the most incredible thing is that so many of us are still connected.  Once you worked for the Senator, you always worked for the Senator.  I have two favorite McGovern moments.

In about 1980, we were taking my eight year old son to the airport in Baltimore.  He was meeting his dad in Aruba, and he was flying unaccompanied.  We were running late and as we arrived at the gate (in those days you could actually GO to the gate even if you weren’t flying) I noticed that Mrs. McGovern was on that flight.  We said our Hellos and then they started to board the plane.  I said to send regards to the Senator and without missing a beat – despite the eight years that had passed -- she said, “Why don’t you give them to him yourself.  Would you mind going into the Men’s room to get him, or we’ll miss the flight.”    And, because I was always McGovern staff, I didn’t hesitate to walk into the Men’s room and get him for the flight. And he looked at me like it was perfectly natural for me to be there.  “Eleanor sent you to get me, didn’t she?” 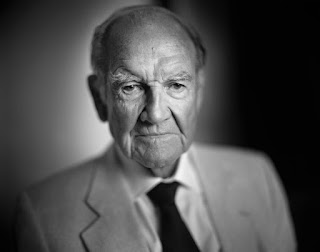 I ran into the McGovern’s a few times over the years.  He was always good humored, dressed in something colorful, tanned, and a gentleman.  Those of us who were fortunate enough to know him, were grateful that we did.  Honored to be a part of that campaign, and simply crazy in love with him as a person and a hero, someone who stood for something more that just the latest pollster’s readings.  He was a role model for thousands of disenchanted young people and a breath of fresh air at a time when none of us could breathe.   We need a George McGovern now.  Someone who could lead us into a brighter future.   Unfortunately, I don’t see it happening any time soon.  I will happily remain a Counter-Culture McGovernik forever.   We’re just sayin’…. Iris

Great column Iris. Me, too, a counter-culture McGovernik, forever.
Thank you.
Peace now, and forever.

I have a few McGovern stories, Iris, but none like yours. In the '72 Election CBS assigned me to Sargent Shriver, even though I desperately wanted to be on "The Zoo Plane".

I was also spent a lot of time Humphrey, Agnew(Argh!), and Nixon more than a few times- and maybe from the standpoint of journalism it was a good thing- but I knew where my heart was, being 27, having covered 3 years of Vietnam.

The evening of the vote I flew home from the campaign I was still going to vote for George, even as I heard on the radio, crossing the Golden Gate, that he had already lost...

We all paid for that as a nation. Maybe we still are, but I love your piece.

A few years back, I was able to tell GM that election night story. He laughed out loud, he looked just the way you've described him, and I knew he appreciated it and was grateful.

You just always KNEW where, and who he was.

Thanks Iris. A wonderful tribute and profile of a great man whom I admired.