It’s going to be one of those blobs that goes in many different directions, all at the same time.  The weather people, CBS, and every elected official on the east coast have talked about the devastation Sandy (the hurricane) is going to bring. It’s supposed to start raining Monday afternoon, and continue through Tuesday – maybe into Wednesday.  Whatever happens, it will be worth it, just not to have to listen to “Sandy” prediction news 24/7. OK, maybe “whatever” is a slight exaggeration.  It’s just so boring to hear the same red-mapped hysteria from every news source. There is a need to communicate the seriousness of the situation, and the plans for how to deal with things like evacuations. However, enough is enough is enough.

Here’s what I know for sure.  It’s going to rain hard. There will probably be strong winds.
Many people will lose power.  There will be flooding in lower Manhattan and we can kiss the FDR Drive goodbye for who knows how long.  About 45,000 people have to relocate, because they will have no power (heat, electric, or gas)  in their buildings. All public transportation will stop by 10pm Sunday.  People will not be able to get to work, which I guess is OK since the schools will all be closed.  Some restaurants will stay open, most will not – because, I repeat (like the Networks), people from places other than mid town East or West, will not be able to get to work.  It’s going to be like Christmas day, but without any singing and celebration.  Today included a three mile walk, cross-town and around some up and down.  The real danger is going to be all the construction material that haven’t been properly secured.  Oh yes, and the garbage that all the buildings leave on the street to get picked up by trucks that cannot be driven because, you guessed it, people can’t get to work. It is going to be a big fat/hot mess for quite some time – and that’s probably a most optimistic prediction. Oh, and we can rest easy because FEMA is on the case. 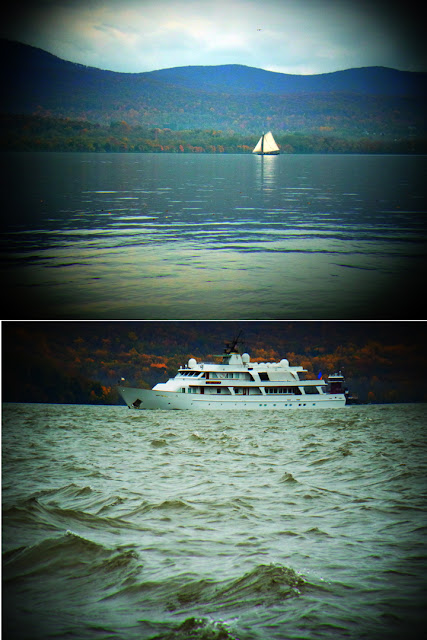 (the Hudson river, 24 hours apart:  the schooner Clearwater, bobbing on smoothasglass water; a fancified yacht, same place the next day... it's getting choppy out there...)

Anyway, speaking of the storm, (But Iris, comma—see previous blob if you don’t get it. You have to be up to date if you expect to be part of the WJS inner circle), what do you predict about the Presidential election.  “What do you mean?” I reply.   “Will the storm effect the election?”  Sure, if people don’t’ have power or water  (they’re cleaning up the storm mess), they are not going to be anxious to leave their homes to get to the polls.  “But if they get to the polls, for whom will they vote?”   They will vote for whomever they think will “fix it”.  Will women vote against Romney because he wants to take
us back to 1950’s social policy?  Nope.  Will they vote against Romney because they don’t know exactly where he stands about anything? Nope.  Will they vote for Obama because they think he has made a difference in their lives?  Nope. “Well smarty pants who and why will they vote?”  They will vote for the person they think will fix the economy. The person who will just fix it.  Create jobs, lower gas prices, and give them back something to hope for.

It seems to me that, because they don’t know what he thinks, they hear what they want to hear.   And what they hear is optimism about the future.   People are no longer afraid of Mitt Romney.  They aren’t sure what he’s going to do, but they know he fixed the Olympics.  He’s a successful business guy.  He knows how to run something.  The rhetoric is such that people think Obama has not fulfilled his promises to America. You remember when, after the Bush disastrous eight years,  people were so hopeful about “change we could believe in.”  Oops, it didn’t translate for too many hard working, middle class Americans, who are now out of work, and as they say sh*t out of luck.

I don’t pretend to know who will win this election. No one cares who created the mess.  It simply doesn’t matter when you’re losing your home or can’t feed your kids.  People are tired of the struggle.  Here’s what I do know.  It will be the person they think can “just fix everything.”  Were just (could you hand me that umbrella?) sayin’….   Iris

Well, you nailed it. The description of NYC after the storm was prophetic. Truly, it is a hot mess.
The election? It will be a cliffhanger up to the end, for sure, but who can "fix" this economy? Or who wants to when there is still profits to be made from wars, oil, interest rigging and the rest of the status quo? To be sure, whoever wins will only have half the country behind them. That can't be good.