It was quite an exhausting two weeks, what with the political conventions and all the blathering talking heads, interpreting what other blathering heads, as well as elected and celebrity blatherers, blathered endlessly.  By far the most entertaining blather was when Wolf Blitzer was interviewing Rahm Emanuel (who you will remember worked at senior levels in both the Clinton and Obama administrations.).  It went something like this, (and please forgive any inaccuracies because I was on the treadmill screaming “YOU IDIOT!” at Wolf.)  Wolf asks Rahm a question that was designed to elicit a defense of the President.  Rahm tries to answer.  Wolf interrupts Rahm. Rahm says, “you asked me a question, are you going to let me answer?”  Wolf interrupts again. Rahm shakes his head.  Wolf, needing to be right, defends his interruption by saying, “I covered the White House during those administrations.”   Rahm, not remembering that Wolf, as a reporter, had not been in any of the policy meetings that senior staff attended, just looked at Wolf and said, “Then you must know everything.”   That’s when I really started yelling “YOU IDIOT,” or maybe it was when Wolf implied he was some kind of a White House insider.

Anyway,  other than Bill Clinton’s presentation, that was my favorite convention moment – for both conventions.  Admittedly, I have spent a great deal of time simply shaking my head.  If I were running the Obama campaign (as opposed to the government), at the beginning, or the end of every political ad would be the Mitch McConnell clip of him saying “The single most important thing we want to achieve is for President Obama to be a one-term President.”  Defeating the President was a priority for the Congress. And how do you do that?  You block the President’s attempt to get anything done.  You do not worry about jobs, out of control oil prices, or the economy.  You change the conversation to bedroom (it’s not your business and who cares?) nonsense – like whether abortion  is acceptable if there’s rape or incest, and same sex marriage.  Neither of which is a priorty for people out of work, struggling with the cost of health care, or having to decide between feeding your family or filling your gas tank.

It’s funny because, in the last month,  everytime something ridiculous happened I thought I’d blob about it.  Then something equally absurd happened so I thought I’d write about that.  But then we were traveling, and we started to get all the details for the upcoming staged reading of “Gefilte Fish Chronicles -- the Musical” together, so I didn’t take the time to write.  Now, I have no idea what I wanted to write about, except the Conventions – which I did not attend and the only thing I missed, was not having total access to the venue.  My convention attending started in 1972. My total access (back stage and podium) started in 1976, and it didn’t end until this convention. The after parties were never important to me.  But having access (or sometimes creating credentials) to the VIP areas in the hall, the Floor, the podium, and backstage, as well as being able to produce credentials for my friends, was really cool. David and I decided not to go, but we did spend $3 to enter a lottery where the prize was to hang out with the Obamas during the Convention.  We thought it would be a hoot for us not to go as journalist and political operative, but still have VIP credentials and access to the President and First Lady.  Too bad, so sad, we didn’t win, but I sure would like to know what lucky couple took our place. 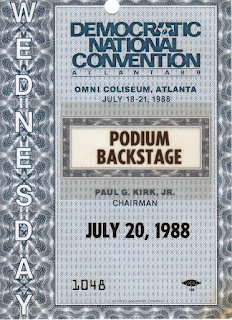 One year Terry O’Connell and I were in charge of a VIP room. As it turned out, there were too many credentials printed and we had to design a VVIP credential in order to control the numbers. Since credentials are issued everyday we needed to be prepared with four days worth of identification. So I went to the dollar store and bought little chicken, piglets, puppies and kitty stickers, which we applied to the distinguish between VIP’s and VVIP’s.  It was far less complicated than I just made it sound,  but it was enormously successful, and only the chosen few could get into the room with the food and open bar.  Ah, the good old days.  They were so much fun. We’re just sayin…. Iris
Posted by Iris&David at 4:19 PM

Who got to be the piglets?And did they run all the way home? Thanks for another good story.
m_harding