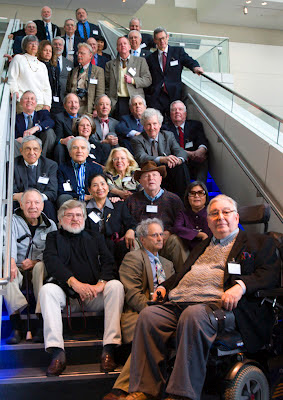 Yours truly sitting just behind Horst, along with a gaggle of journos....
Posted by Iris&David at 11:37 AM

reading your words about Horst is learning what the real history of our profession was about. Thanks! RIP HORST...

Beautiful tribute to an old friend and colleague... I found myself working alongside Horst is singularly dangerous and wonderful situations. A jungle clearing west of Tay Ninh on New Year's Day 1969 covering the release of American POW's, In Hanoi with Arnett, and in Portugal, when the revolution came - We could heard gunfire all around us in Leiria... Horst looked at me, "Blanks!" He laughed... Then branches, leaves and twigs began falling all around us. Bullets whizzing past us as we hit the pavement, crawling up behind an old stone wall. Still laughing, he said, "Not our time!" But we both knew it had been close. Skip Brown

Would enjoy putting some names on the faces in the group photo. I see you, Dirck Halstead and is that David Kennerly all the way at the top of the stair?