Thomas Wolf was not altogether wrong when he wrote that “You Can’t Go Home Again.” We often invoke his title in our lives, but when you really ARE trying to go home, it becomes a very different, very personal matter. I was in Salt Lake City ten days ago for the opening at the Utah Museum of Fine Arts of a photographic show of some of my work … “Too Close.” It’s a set of pictures taken from news and newsy kind of events of the last forty years, which stand back from the subjects, giving the more context to the scene, showing, more or less, just what I saw when I took that picture. Over the years when mom still lived in Salt Lake (up until about 4 years ago) we would regularly drop by the Museum on trips home, and mom would berate the poor volunteer at the front desk, beseeching that her talented son (yes, me!) ought to be on display there. 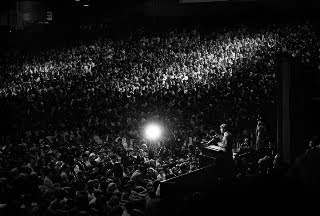 RFK at BYU, 1968
Well, it finally happened this fall. A 53 piece show beginning with Bobby Kennedy’s campaign in 1968, and ending with a picture of the Space Shuttle launch two years ago. In between are a mix of politics, news, some pretty famous, and relatively unknown folks. The most interesting thing about it is the ability to just stand in front of the picture and study all the details. Always a lousy caption writer, and envious of tough minded wire guys who would ask someone’s name, age, and hometown no matter how awful the scene, I have presented a set of pictures which are full of mostly anonymous subjects, aside from the Presidents and Ayatollahs, who we all seem to know by heart. Thirty, forty years on, I really wish I’d written down some of those names. [LangVeiGI] I’d love to know what’s happened to these people. 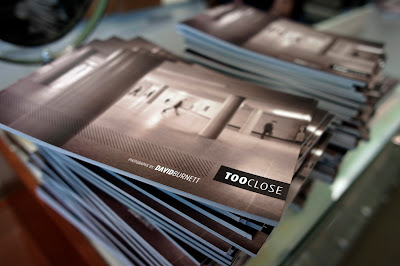 When you’re young and impetus, as I suspect I was, those kind of details mattered less, and the fact that I worked mainly for weekies (Time, Life …) the names seemed to be less of an issue than it would have been were I shooting for a wire service or a daily paper. Too bad for me. 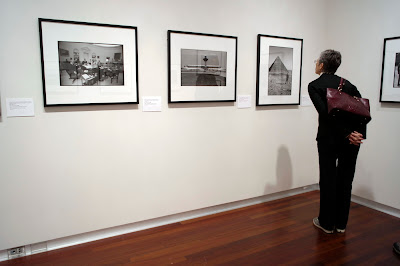 A patron of the arts...UMFA 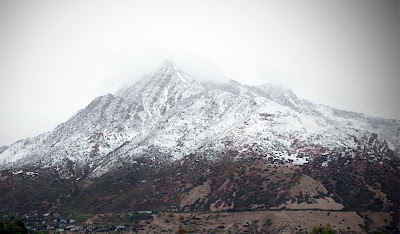 Mt. Olympus, seen from "home"
I went to SLC in time to help hang the show, work on the order of presentation, and arranging of the double-hung images (there was only so much wall space) and in the end, I think it looks pretty damn good. We had a crowd which included some cousins and my dear Aunt Esther (who will be 99 this Christmas day, and no doubt sending out dozens of emails when she does… she is addicted to email!), and at least 150 people who weren’t related to me. Yes, actual citizens. That was gratifying. I spoke for about an hour describing my early days in the Olympus High darkroom, and how it led to a career which has seemed to fly by in a hurry. I’m getting tired, in speaking about my work, of using the phrase “… well.. thirty six years ago…” everytime I mention a photograph. But at the same time, I’m happy as a lark that I’m still able to be taking pictures, and some good ones, sometimes even for the same folks I worked for 37 years ago. I realize that life is meant to fly by on its own schedule, not necessarily our own. 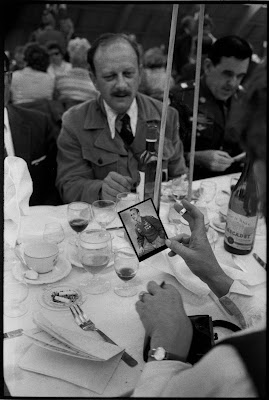 a "young" D-Day vet at a lunch sponsored by the French, Omaha Beach -1974 (the 30th anniversary)
In 1974 I went for the first time to Omaha Beach on occasion of the 30th anniversary, and met some of the D-Day veterans, many of whom later became every-5-year reunion acquaintances. Even know I wonder if those vets, as they grew older, would look back upon D-Day with the same wistful wonderment I do over things I did in the 70s and 80s, which seem so close, so recent that the numbers feel like lies. Stories I worked on in 1979 still feel like they might have been last year, or last month, but certainly NOT 32 years ago. It’s really true that what our parents always said… that time only goes faster, is as true as “you can’t go home again.” 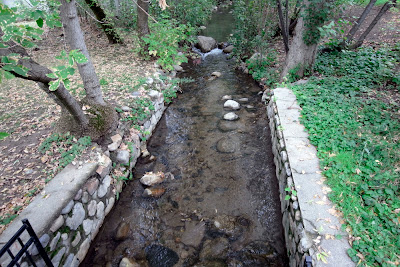 the Creek and stone bridge
Well,, I tried to go home again. Or at least near home. Mom and dad sold our original Cottonwood house in about 1990. Dad’s driving had deteriorated, and without much fanfare (which always amazed me) they sold the house in the country, the one with the 300’ driveway, the big field in front where the entire neighborhood played baseball season after season in the 50s, and where my pal Jamie Atwater and I would find a surplus of dirt clods near by when we wanted to play Junior Marines. They bought a house conveniently located adjacent to the 6th fairway at The Country Club, and he was able to just “walk to work,” simply crossing the 6th, and in two minutes was at the Pro Shop, ready to report for his next round of 18 holes. After WW2, with some great degree of clairvoyance, my granddad and his two brothers bought 31 acres in what was then the june-grass covered boonies off 6200 South. It was ten miles from downtown. There was a #16 Holladay bus which would come about once an hour, and take the long, plodding trip to downtown, and which we used to go see a variety of scary 1950s horror movies in the years before my bike or a car would get me there. On that plot of land were a total of four family houses, each separated by enough distance that if you hiked thru the june grass for half an hour, plucking the sharp hay colored schrapnel from your socks as you’d go, you might see a dead deer carcass sooner than a cousin’s driveway. 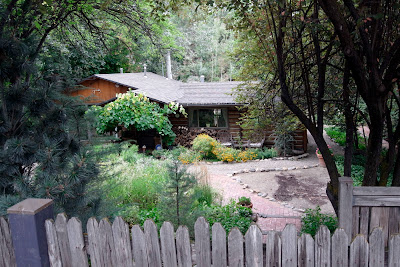 Grandma Atwater's...
Dad would occasionally go into the back yard with a two-wood and a few old, cut Titlest golf balls, and aim them over the trees towards Aunt Molly’s house. She was the grand dame of the family ( a 5’ 0” version, who when she drove her oversized Cadillac gave the impression of a driver-less car, that impression betrayed only by the sight of two hands reaching up to the wheel to attempt to steer it.) I don’t think dad ever hit a window, but now and then when we’d head over to swim at Molly’s pool, we’d see a few golf balls on the lawn which had been launched from our back yard.

Once mom & dad sold the house, the rest of the cousins thought, why hold on to this when so few of us are there. So they formed a corporation, put all the land into it, and sold it off as a newly fancy soon to be gated community called Roseland. Over the last 15 years, a dozen or so gigantic homes (the 4 or 5 bay garages are as big as our house was…) which have replaced those somewhat reasonable 1940s homes which previously habitated there. On the Friday after my show opened, I drove out to the old family homestead and took a little look around. The ever moving Cottonwood creek which was next to our house was still snappily clear with very drinkable water, the stone bridge where Jamie and other neighbor kids and I would hang out is unchanged. There is a big gate at the entrance of our old driveway, and it felt absolutely extrusive (what is the opposite of intrusive?) I walked the short length of 23rd East where our mailbox (often replaced when vandalized by neighborhood kids) had stood, and peered into the grove of trees across the street where Grandma Atwater (Mary Meigs Atwater, one of the legends of modern Native American weaving ) had lived with her obstinate Doberman, Duchess. I say obstinate but Duchess really only ever bit me once, a lunged-at nibble on the forehead when I’d confronted her in the grove one day. I was too young to be naturally afraid of Dobermans, but I think that since then I have been more than a little suspicious of them. I realized that even for the people who bought ‘our house’ twenty years ago, that it’s starting to feel like a long time ago. We’ve just moved into a house which has whole set of grown ups who grew up there in the 60s and 70s, and while I would happily welcome them into “our place” to have a look around, I suspect they would see it as very nearly alien territory, filled with our tastes, our things, and bear little relationship to what they knew when they were four, watching Sesame Street. Maybe we are meant to float around from place to place, and those of us lucky enough to actually have a choice in the manner can usually turn what might be gut wrenching and frightening into a soft landing. But there is something in the human psyhe that longs for the familiar, and no matter how much we may think of ourselves as a “mobile society,” destined to be on the move, that place we think of as “home” will forever sit warmly in our hearts. We’re just sayin’… David 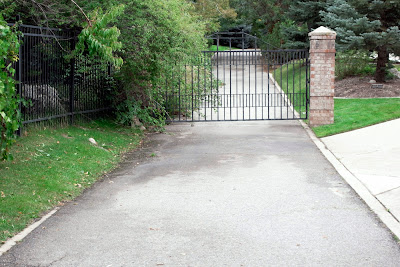 the Extrusive Gate at our old driveway 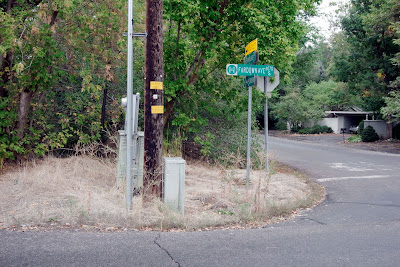 the telephone pole on Fardown Ave. where I first clobbered the passenger side of the Plymouth, circa 1963
Posted by Iris&David at 11:30 AM