A Celebration of Lives

"Happy, happy birthday babies". They would have been 91. It doesn't feel like they're permanently gone. The only time that the loss is unimaginable, is when you need an answer to a question and the 'answerers' are no where to be found. Things like; 'on which holiday do we light a memorial candle?' Or, "do we need to sift the flour before we make the cake?" Or," who is the person in the picture that we don't recognize?" Or, "With eight kids and two bedrooms, who slept where?" Or, "Where did you put that great black sequin dress"? 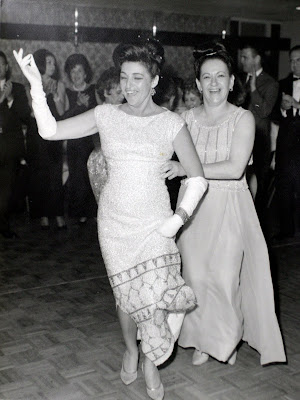 These were questions that would always lead to some kind of a discussion. While, not quite a conversation, it was also not quite an argument. Except it was usually loud and started with "What are you talking about? That is not true!" Or, "It certainly did not happen that way." Or, "Are you out of your mind". You get the idea. A confrontation of some sort, was how they expressed, not only their opinions, but their love. Yelling was an art form that they developed with years of practice. They were never yelling at you. They were just yelling... probably to be heard because there were always so many voices at once.

If you weren't part of the family, then it was likely you never heard any of these squabbles. They were particularly deft around strangers. We always said, "They were very good with strangers." Strangers thought they walked on water. So sweet, so kind, so generous, so charming.... And they were, but we were often in awe at their ability to become a whole other person from the one we knew. Don't misunderstand, they did not pretend to be anything they weren't. It was just that they had different personalities depending on the people in the room. They were, however, always consistently loving and very funny. They didn't always know they were funny - but it didn't matter. And, whether you were talking about the twins (Rosie and Peppy) or any of the eight, they seemed to have one mind. Yes, they argued all the time, but they also never needed to talk to know what one of the others was thinking.

The sibling's, Betty, Jack, Sarah, Sophie, Fritzie, Helene, Peppy and Rosie, if you take the spaces out between their names, (bettyjacksarahsophiefritziepeppyrosie), they become one character who I have always thought of as Lekish. Not to exclude their spouses, who are certainly a part of the whole picture and a good part of the color. So, today, on the RosiePeppy birthday, I will light birthday candles for all of them (and no it's not just an excuse for cake.) I will sing my heart out,loud as I can, in my terrible voice. I will think about all the joy, laughter, and "schpilkes" they brought us for all of our lives. And I will miss them.... even more than last year and probably less than next year.... We're Just Sayin ....Iris
Posted by Iris&David at 8:08 AM

you forgot Helene in the Lekish name....