Last night I was walking back to my apartment . It was raining—pretty hard. If I walk on 54th street I have to pass St Peters Church, where there are always any number of homeless people making their home. Usually , their home is a few cardboard cartons and maybe some plastic to keep them dry, if it’s raining. I was in a good mood and as I passed by the church, doing a tuneless and hopelessly unbalanced (yes I was dancing clumsily down the street), version of “Singing in the Rain”, I noticed that there were four people length cartons on the steps to the entrance of the church/York Theater. (The York is in the basement of the church and they share and entrance.) When there is a show, management clears the way for the paying customers, but if there is no performance or church activity, the cartons are not, like the people, displaced.

So very tragic. I wondered what had happened in their lives that put them in this impermanent place. It was hard to dance past this incredibly lonely and, especially of late, a much too frequent scene. Then for whatever reason, I flashed back to the previous day when the touring company of “Seussical” the musical, descended on our old homestead in Arlington, Virginia. Twelve young actors who were so excited about everything. The juxtaposition of the people who live on the steps of a theater, and young people so enthusiastic about their lives and the future in the theater, hit me in unexpected ways. 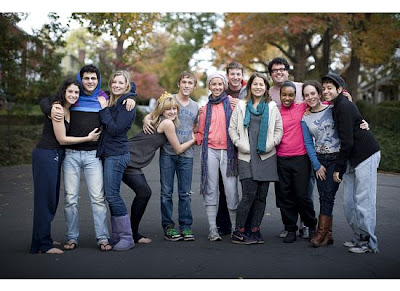 First of all, I stopped dancing. The people in the boxes couldn’t see me, but still my happy little two step seemed irreverent in front of the boxes. Then, as walked past Citi Corp, which is adjacent to the church, theater and boxes filled with people, I thought, why isn’t the government bailing out these unfortunate souls. What would it cost? Certainly not as much as it cost to bail out all those rich Wall Street companies – who are already back to their old tricks. And certainly not as much as escalating a war in Afghanistan. Nope, it would be pennies in comparison.

Then I thought about the non stop political commercials—it doesn’t matter which one. They are all the same. They are not about what their candidate will do, they are about what the other guy won’t do. The professionals call it negative advertising. I call it a pathetic attempt not to deal with the real issues. There is another thing that is consistent with all these commercials. Every candidate says something like, “We are fighting for your rights, future, jobs, families,"(pick anyone or all of these.) How exactly are they fighting –with boxing gloves, guns, wet towels (pick any or all of these)? But the better question is, why do we need anyone to fight for anything. Just the word ‘fight’ is an indication of what campaigns have become – war zones. They are no longer organizations which look to make life better for the general public. They are battles with words as their weapons and the truth hard to find or even irrelevant. In other words, you don’t have to go to Iran, Iraq or Afghanistan to fight. All you have to do is put your ethics away and sign on to a political campaign.

Back to singing in the rain. It’s actually raining right now and worse, it’s Halloween, my least favorite holiday. There was a time when I loved decorating the house, putting on my witch attire and scaring the little children when they came to the house. For many years, as a concerned about health parent, I gave little toys instead of candy. Sure the kids could choke on the little pieces, but at least they wouldn’t get cavities. Now I don’t care if they get cavities or go into sugar shock. There are so many more important things to worry about. Wars, people starving, people without jobs, children dying in foreign places and the definition of health care. It would be terrific if we could, like the young troupe of performing artists who stayed at our house, feel great about the world they were about to encounter. Or it would be nice just to sing in the rain without having to think about much else. We're just sayin'.... Iris
Posted by Iris&David at 1:33 AM