This seems to be a month for anniversaries. Last week (the 4th) marked the 30th anniversary of the taking of the US Hostages in Tehran, an event which spun out of control of both the Americans and Iranians, each feeling obliged to plant feet firmly in the ground and not give the other side an inch. What should have been solved in hours (as it had been in February 1979 when militants took over the Embassy for a few hours) went on till relations had soured between the countries well beyond what anyone had thought possible, Jimmy Carter had taken his Presidency down the path of not return, 8 military guys died in a failed rescue attempt, and above all, the chance for any civil dialogue between Tehran and Washington was totally ruined. It wasn’t till Reagan had taken the oath of office, 444 Days into the depressing chapter, that the hostages were finally released. I had been for almost two months in Iran the previous winter, during the Revolution, having arrived there on December 26, 1978 fresh from a story in Pakistan. I’d heard of unrest, and protests against the Shah building for that previous year, and thought I’d spend a few days checking it out for myself. Within hours, I realized that it was a story which was not going to quietly go away. There was a degree of energy in the street demonstrations I’d rarely seen, and I decided to hunker down and see for myself what was going on. In front of the eyes of our cameras, the Revolution played out day by day. Following it was something like being in a race in which you didn’t know where the finish line was. You just followed the events from one day to the next, and like the Iranian people themselves, tried to make sense of it every night. By mid February the newly returned Ayatollah Khomeini had consolidated power, and the Shah had fled. With rallying cries at nearly all the political events primed with “Death to America,” the stage was set for what would be come, in November. As it happened, the day the hostages were taken I was in Thailand, waiting for a departure to Burma. I’d managed to get a one week visa for a trip there, in the days when you could still spread 30 rolls of film through your luggage, and be relatively sure of not being seen as a “professional” photographer. Bags were not routinely x-rayed yet, and with a bare bones set of 2 AE-1 cameras (see the ad I did with John Newcomb for CANON shortly there after) and a few lenses I spent a visually enticing week in that mysterious country.

While waiting for that final visa, I secured a pass from the Thai military, and drove into Eastern Thailand where thousands of Cambodian refugees, fleeing the killing fields of the Khmer Rouge, were being kept in refugee camps. I only had a visa for a few hours, but the impression those faces made on me has never gone away. Now, years later, we can speak of the Killing Fields as if we knew all about it at the time. But once the Khmer Rouge took over in 1975, little information got out of the country. 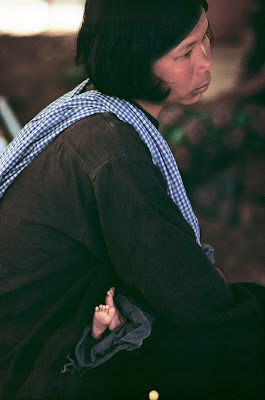 At the time the US, still smarting from the ignominous departure from Vietnam in 1975 still had the feeling that the Vietnamese could do no right. Yet it was finally the Vietnamese army which in 1979 actually invaded Cambodia (following previous Khmer attacks on Vietnamese border towns) and defanged the Khmer Rouge, ending the regimes tenure. I remember feeling at the time – after I saw the faces of the Cambodian refugees, that as odd as it might sound the Vietnamese army should have been given the Nobel Peace Prize. It was too little and far too late for the millions of Cambodians killed after the 1975 take over.

This week, Monday, is the 20th anniversary of the opening of the Berlin wall – the sudden decision by East German authorities to finally give passage to East Berliners, letting them travel freely to the West for the first time since the Wall was built in 1961. Looking back on it now, it’s hard to relate just what a huge breakthrough this was. As a child of the cold war, who remembers the palpable fear of those confrontations in the late 50s and early 60s with the Soviets, to see the end of the Wall, and all it represented, was an enormous surprize. It all happened so quickly. After years of having come to accept its leaden and stultifying presence, in just days the world changed. In response to the news of things seeming to bubble along, I’d planned to leave Washington for Berlin on 8 November, which would have put me there at just the precise time when things broke. But at the request of a good pal, Doug Kirkland, who was having an opening exhibition in DC that night, I put my trip off for a day. (It was in the days when you could actually change an airline ticket without losing the whole value of it…) On that Thursday afternoon, as I was packing, I received a call from Stanley Kayne, then TIME”s photo chief in Washington. “The East Germans are giving visas… “ he said. 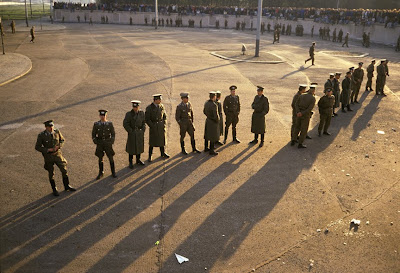 “What does that mean?” I asked.

He summed it all up,”the East is opening up.”

I felt that I’d once again missed a key moment in something going on in the world. (You know, you always feel like you’re missing something.) But it was with even more excitement that I packed my bag that afternoon, and headed to Dulles to catch the plane. The next morning, arriving in Frankfurt to grab a plane to Berlin, I called Lennie Heinen, the TIME picture coordinator in Bonn. In one of the very few moments of my life which reminded me of a John LeCarre novel, she gave me the following shipping instructions. “By one o’clock you need to go to Check Point Charlie. On Friedrichstrasse, look for a large red S on an office building. Under that S will be someone holding a red TIME Magazine envelope. Give them your film.” Somehow it seemed so appropos for my first shipment from Berlin to be so shaded in that mysterious cloud that the Cold War had given us. Once there I made my way to Check Point Charlie, shot for an hour, and shipped under the red S. Then I headed to Brandenberg Gate, that enormous 18th century structure which is one of the real marvels of the city. Hundreds of young people were there, standing on the wall, having played a large game of tag with East German soldiers the previous 24 hours. 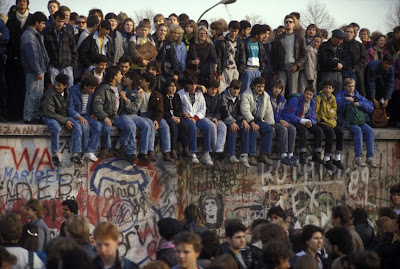 I reloaded my cameras, stepping over the cables which anchored a TV crane near the wall. As I did so, there was a tap on my shoulder, and I turned to see Tom Brokaw tell me those words which no journalist ever hopes to hear: “You should have been here last night.” Of course he was right, but the story continued to undo itself over the next week and those weeks turned into months. It was a new world, and not only the Germans but the rest of us beheld it all with amazement. In the months to follow, the regimes in Czechoslovakia, Bulgaria and Romania will fall as well, and that time we knew as the Cold War would slowly morph into that new world which we now live in. Sometimes, I have to say, it’s almost with nostalgia that I think back to the simple days of the Cold War. No IEDs or “asymmetric warfare,” just the basic worry that at some point, potentially, a giant phalanx of tanks and planes would roar across Europe as the Soviets would conquer all. Never happened. Didn’t make sense for either side. But it was the nightmare you could almost live with. The new world isn’t as pretty or orderly, but to paraphrase Don Rumsfeld, you “look at the world the way it is, not necessarily the way you want it.” 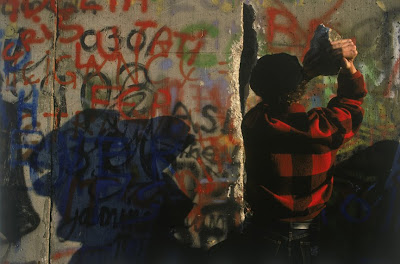 I can’t begin to describe the joy that those few days of liberation felt like in Berlin. The sparkle of discovery in the eyes of the Osties was something I’d never seen before. None of us really could believe it was happening. But as sometimes happens, the pictures of this most momentous event are uniformly less powerful than the memories of those dark and cool Berlin nights. The cries of German revelers still rings in my ear: “Die Mauer is Kaput”…. “ the wall is finished…” Often as a photographer, you make great pictures at an event of little significance. But the opposite is possible too, and when it does, when those pictures just don’t match the power of how you remember it, you just have to take it to heart that the satisfaction of having been somewhere at the right time is reason enough to have been there. Sometimes just being there IS reason enough. We’re just sayin’…David
Posted by Iris&David at 11:21 PM