It’s 5:00 and I am anxiously awaiting the beer fest at the White House. A conversation over a beer, just three regular guys sitting around at a picnic table with God knows how many press people standing by to see what happens. Here’s what’s not going to happen: 1. The police officer will not deck the professor – not in front of the President – even if the President called what he did, stupid. He will also never understand why what he did was stupid. He thinks that no one has a right to mouth off to the police – even in their own home. 2. The Professor will never understand what he did wrong – based on his life experience he probably doesn’t understand why you have to respect the police, even when you are standing in your own house and they know it’s your house. 3. No one will live happily ever after. Oh sure, there will be lots of lip service and a handshake, but at least two of the men will walk away knowing that they were right – regardless of the kind of beer and the presence of the President.

Maybe the people with whom the President should be having a beer are the Blue Dog Democrats. Who are these people described like a cartoon. Wikipedia says, “The Blue Dogs are the political descendants of a now defunct Southern Democratic group known as the Boll Weevils, who played a critical role in the early 1980s by supporting President Ronald Reagan's tax cut plan. The Boll Weevils, in turn, may be considered the descendants of the "states' rights" Democrats of the 1940s through '60s. 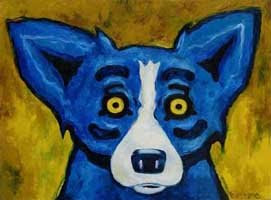 "Blue Dog Democrat" is derived from the term "Yellow Dog Democrat." Former Texas Democrat Rep. Pete Geren is credited for coining the term, explaining that the members had been "choked blue" by "extreme" Democrats from the left. The term is also a reference to the "Blue Dog" paintings of Cajun artist George Rodrigue of Lafayette, Louisiana; the original members of the coalition would regularly meet in the offices of Louisiana representatives Billy Tauzin and Jimmy Hayes, both of whom had Rodrigue's paintings on their walls. Tauzin and Hayes later switched to the Republican Party. The Blue Dog Coalition was formed in 1994 during the 104th Congress to give more conservative members from the Democratic party a unified voice after the Democrats' loss of Congress in 1994.
Too much information. It certainly is for me. I wish could understand anything I just wrote. I still have no idea what choking or paintings have to do with political conservatism, but it is Wikipedia, so it can get a little polluted. And, what I don’t know, doesn’t matter. What does matter is that these elected officials, who are Democrats, are not supporting the President’s health care reform, which should actually be called health insurance reform. And besides, I’m sure the White House could get a discount on a case or two of cold beer so it would probably be worth the investment. You know, just the guys sitting around shooting the s**t.

Or maybe the people who are crafting the message should make it easier to understand. The President has been on the road delivering a message that isn’t working. 52% of the people, ( those who don’t have health care), support the idea that everyone should have health care. Duh!. And the rest of the population is either not sure or against any changes – even if they don’t understand them.
Oh my, who would believe it? People are afraid of what they don’t know and they don’t understand. Just like the Professor and the Policeman, none of them can comprehend what the other was thinking or saying. It’s like that old cartoon with the dog and his owner. The human gives the dog carefully worded, verbose instructions, and all the dog hears is “blah, blah, blah”. Maybe a beer is the best way to get someone to listen, but clarity might work just as well. We’re just sayin’…. Iris
Posted by Iris&David at 6:23 PM

Iris,
Yes. Right on the money. You should be a regular on Fox News. You make sense! You sound like Bill O'reily.