It turn out that July 4th is one of my favorite holidays. I guess part of that is because my son was born on July 3rd, not exactly July 4th , but I gave birth on July 3rd because my pregnancy was well into it’s 10th month and I knew that if I didn’t give birth on the third my doctor would be on vacation until who knows when, and I would have to wait at least another week day until he was born. If you have ever been pregnant you know that by the end of your seventh month you have pretty much had it – so imagine what it’s like when it’s more than nine. Briefly, I walked into the doctors office and refused to leave to go anywhere but the hospital. I was absolutely serious and the doctor, having no alternative, sent me to the hospital and induced the labor. As I said, I was three and a half weeks late so they weren’t worried about a premature baby— quite the opposite. I thought he would be at least 11 pounds. But he wasn’t and although it was a difficult delivery, we were all able to celebrate Independence Day by truly being independent. 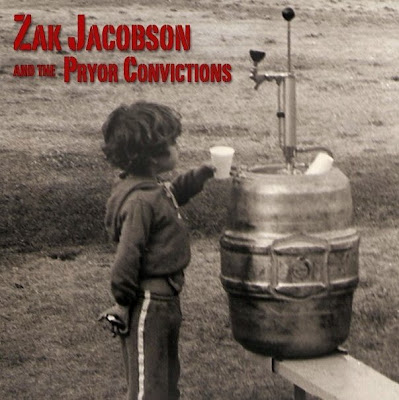 Seth, age 3, Independent!
Some of my best memories have been about July 4th. Like during the Carter Administration the President invited all the political appointees (even the young ones), to sit on the White House Lawn and watch the fireworks. That was a pretty great family event. And when Reagan was in office we all went to the Capital to watch them from the Speakers office – which was supposed to be the best possible place for viewing. As it turns out, it wasn’t because the smoke from the launching was so thick that we could see almost nothing. But in Washington it’s not about what you can see, it’s about who you know. 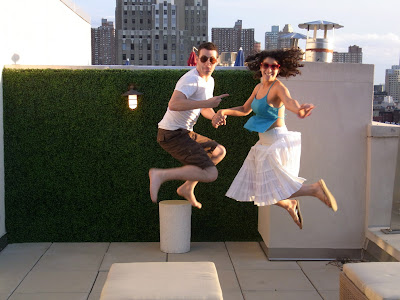 Jordan Kai and Steve
Over the years we have planned July 4th celebrations with friends and they were always great fun. Most of the time, we would just walk to the top of the hill near the street where we lived and we would have a perfect view of the Capital and the wonderful lights that lit the sky. The fireworks were usually a nice addition to what had been a fabulous party with friends, and that was always memorable. After 9/11, the fireworks in New York were moved from the Hudson to the East River and we could see them from the roof of our apartment, which was terrific until they build a mega apartment complex that blocked our view.

This year we started the day with a trip to NJ to have a holiday barbeque with our cousins the Zodikoffs and the Shermans. They are wonderful cooks so having fabulous, as well as plenty of food is never a question. The banquet started with chicken wings, home made hummus, and fruit filled sangria. It ended with home made ice cream chocolate chip ice cream sandwiches. Needless to say, we were not disappointed – it was up to their usual “you cannot move for hours” after the meal standards. 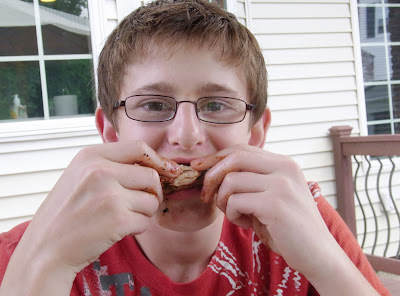 Nathan 11, Chickens 0
Because the show was no longer on the East Side we needed a viewing vantage point on the West side and cousin Chuck permitted us to watch from the penthouse of a building he developed, which is still called but was in a previous, life, a recording studio called “The Hit Factory”. In its’ recording days, it was the site of a good number of Grammy award winning recordings. As a matter of fact, until early this week, there was a Michael Jackson platinum album on the wall. We all agreed it was dangerous to have it hanging in a place where it could be seen by anyone walking past the building. 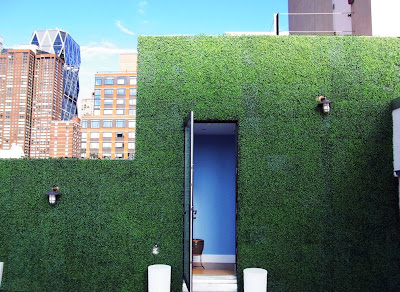 The Hit Factory roof
Anyway, just a few friends and family joined us for the fireworks spectacular and it was that. Although some of the viewing was restricted by taller buildings, the most amazing thing was that the fireworks surrounded those structures and it often looked like the building were wearing glittery wigs or sequins bow ties. It was truly remarkable. I don’t think I have ever seen that many colors or such a glorious presentation in any previous fire works display. 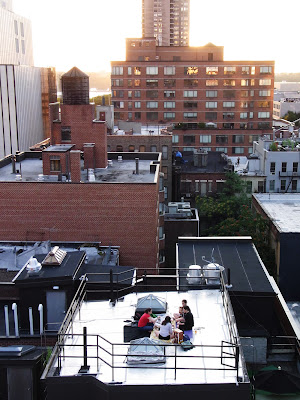 Tenth Ave. neighbors, picnic'ing NY style
The key, however to any of these noteworthy and memorable occasions is to spend as much time as possible with people you love. That way, no matter how brightly the sky is lit, or how much food you eat, (a good dose of Tums can’t hurt) the glow will warm your heart and make the memory of what you saw and how you felt very special. We’re just sayin’… Iris 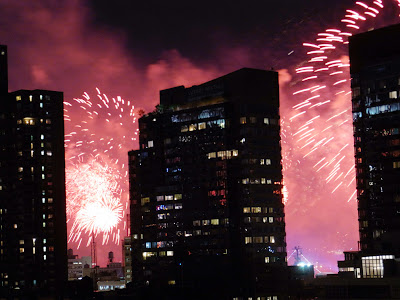 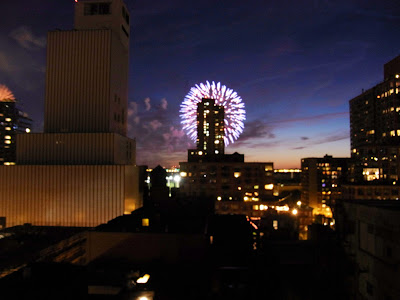 It's got to be so way cool to reside in a building with such recording history!

I know what you mean.
Aunt Claire and I were in NH where the cold damp weather made stuffed roasted chicken, potatoes and string beans seem like a good idea. Because of the Thanksgiving aroma and the temperature in the low 60's, we had to keep reminding ourselves that it was actually July.
Fortunately, the evening was clear enough to enjoy the fireworks that have been stored in the barn for the past 2 years. Love those sparklers and Roman candles!
It was a small group of 8 but full-blown nonetheless, without the crowds but with the American multitudes in celebration.

glad you're making the best of the weather--sounds terrific