How Does It Happen? 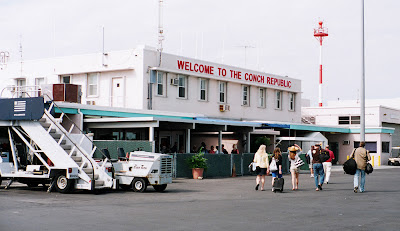 Where did that week go? I was typing away, blobbing along, finished, posted, and it seems like yesterday. It was a week ago: the week flew..4 days in Florida attending the launch party of Iris' new book "So You Think You Can Be President?!".. 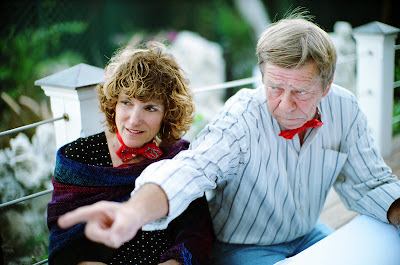 Iris and co-author Clay Greager
which was gobs of fun, and truly, arriving in Key West when it's 34 in Washington is a kind of blessing. As nerdy as you feel in a leather coat and sweater, there is something almost refreshing about the blast of heat you feel as you first step into the muggy warmth. 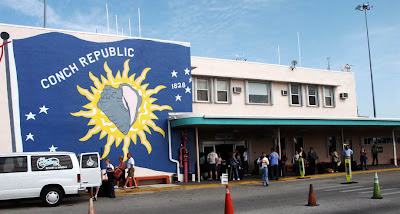 The first thing you notice when your feet hit concrete is that they are building a new airport in Key West, yet another trashing of a wonderful aging icon of culture -- the single floor, go-thru-security-on-the-sidewalk-since-its-too-crowded-inside, immensely user friendly terminal. Like LongBeach (the Jetblue LA hub) where you can walk across the terminal in three minutes, it reminds you of what airports were when the public was actually trusted not to be complete idiots. As a kid in Salt Lake City, there was a chain link 5' fence which enclosed the terminal, but it was free flowing and loosely drawn, so you really felt at home going outside to watch the planes land and take off . (In 1956 that was second only to watching the out of towners line up for the Sunday Morning Tabernacle Choir performances, on Temple Square.) The chain link, once you stood back a few feet, almost didn't exist... it was as if you were standing on the ramp, watching the DC-6's and Convairs grind the air with their propellers at a very noise inducing distance. Now they are building a double floor, take the elevators up and down, terminal, all in the name, one supposes, of "Security". What hasn't invoked that overused term in the last six years?

I recently came across a set of pictures from the Palm Beach Post, showing in loathesome detail the police response to a large gathering of hopefuls at the Boca Raton city housing office. A limited number of housing vouchers were being made available for what turned out to be a much larger number of applicants. The cops were called in to make sure no one went postal while in line, and once the vouchers were awarded, out of the line, as the crowd went home. If you wondered where all that "Homeland security" money went to for towns like Boca, take a look here: In full dress Riot gear, the cops showed up to keep the families and their kids from getting hostile. In fact, they kept telling people who'd brought their kids (where do you stash them when you're in the middle of looking for a home?) that they should be more careful, I suppose so that if they decided to bust a few heads, they wouldn't be seen hitting any babies. The pictures nauseated me. This is what it's come to. Hot shot ZORRO troops, dressed in black, knee pads, batons and the ever so handy assault rifles (I believe the Shah proved those extremely effective in crowd control). It was the kind of demonstration of power which made you seriously reconsider your position on "Law and Order". Most countries who wrap "Order" into their national slogan end up sacrificing everything else just to keep the order. Are we becoming like that? 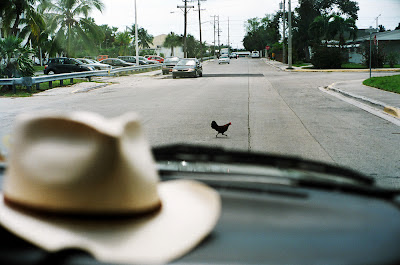 This picture pretty much explains Key West
But that is, I suppose a blob for another time. Back to the airport. There must be a 21st century version of the Peter Principle (People rise in the bureaucracy to their level of Incompetence) which states something like "No usable space should be considered inviolate, when it can be razed in favor of a space far more expensive (oh la la!! OverRuns!) and less convenient to those for whom it was designed. But then I guess that assumes the 'designees' are the public, when in fact it's really the TSA guys who demand you take a plier to your nipple ring just to prove you aren't a threat to the Republic. On the campaign charter planes, in the absolute height of common idiocy (the opposite of common sense) the candidates themselves are wanded before they get on their own charters. I kid you not. Cindy and John McCain -- arms out! Hillary and Obama may get a pass since (like the press on her plane) there is a Secret Service screening each morning. But if you actually consider it "security" to have to wand a presidential candidate, then I GUARANTEE you that you are blind to the actual threat. Of course, you get to keep your job, and these days, that is saying something. But the day John Mccain leaps to the cockpit and demands the plane fly to Havana (maybe he does want to meet Fidel after all) is a day I'd like to be on that plane. And speaking of nipple rings, I wonder if any of the TSA folks are carrying such beauty adornments. Maybe there should be a swap-a-roo day, when we, the public (you know, "for which it stands") get to strip search the searchers. Let's face it: It can't make us any less SAFE. Here's to one-story airports. We're just sayin... David
Posted by Iris&David at 7:08 PM

Every American, after receiving their bribe / pay-off from the IRS this spring ($1200 right? Thanks Congress, the check is in the mail), should use the money to get a nipple ring or stud.

Yep, every man, woman and child, so that everyone passing through the TSA's stare can set off the GD metal detector.

I want to see wands everywhere.

And perhaps after the piercing, we can all visit the Army/Navy store to spend the rest of our money on black storm trooper uniforms.

I think I'd look good in black listening to any Tabernacle Choir.

Iris, congratulations, dearest heart! A new book. You've mentioned it,but I want to know more. Who is the publisher? I'll try to get my library to get it. No one is funnier or more perceptive about presidential politics than you are. Hope you'll be doing lots of TV/radio interviews. You will bring such needed humor to a campaign that is beginning to bore even me. Love, and again congrats.

Be,
The book will not be in stores, or libraries until mid or late April. But you can see it on www.soyouthinkyoucanbepresident.com. Also I logged on to your blog but can only get two from July. I was looking forward to the latest because you know how I love your writing. Am I doing something wrong?

Much congratulations on the release of your book! I've every confidence it'll be great..

Someone quite famous(you know him well) a couple of years past told me,"When you find success, it's great.." I am looking forward to April..

Will it be in Books-A-Million?