While this has become known as the Holiday Season, for a Jewish kid who grew up in the very Mormon outpost of Salt Lake City, we pretty much knew it as  the Christmas Season, with Hannukah and a few other winter holidays accompanying.  Quite unlike most of my East Coast Jewish friends and family, we did have a Christmas Tree.  And though we learned all the Christmas carols in school during those cold and snowy Decembers (hey, it was Salt Lake! )  it remained far more of a civic enterprise than anything particularly religious.  We had stockings hung by the fireplace, and the one thing we kids could count on was getting a jar of Hawaiian macadamia nuts, with which mom would whip up some sensational banana-macadamia nut waffles for breakfast.  They were sublime.  At the age of 11 or 12, my big present was a little yellow box, in it, a Kodak Holiday Camera kit: the camera, looking very serious and beautifully designed in its dark brown plastic, and a flash attachment with a plastic shield, should there be a flashbulb explosion (I never saw that happen, but I'm pretty sure it has occurred a few times.) My little Holiday took 127 film, most of the time being Verichrome Pan black-and-white, with the occasional roll of Kodacolor.  But more than anything, that feeling of having your first camera is something you don't ever forget.  I used that little camera for several years, documenting the Burnett family at home, on trips, and especially pictures of Dagmar, our wonderful little dog.  When I finally joined the Olympus High Yearbook during Junior Year, at age  16, I saved up for an aged Exacta 35mm reflex camera, and eventually bought it used for $40 downtown.  I had been saving for a couple of months to score a Spiratone tele lens, and that Christmas I received a check from mom and dad for fifty bucks (that was a LOT of dough then) with a note that I should use it "for a Zoomar Lens!"   I'm not sure there ever really was a Zoomar lens, but that Spiratone glass might as well have been one.  A lot of light, a lot of images passed through that lens in its lifetime. 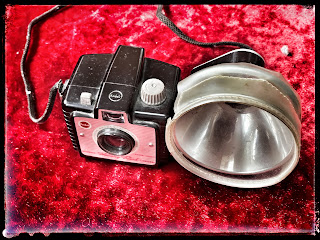 Today, I went downstairs where that very same Brownie Holiday camera sits on a book shelf, where it has been keeping my 1964 Yashica-Mat company for the ten years I've been in Newburgh.  The Yashica-Mat still looks like you could attach a 65D Honeywell potato masher strobe and go cover the State House or a High School football game.  (The esteemed former Salt Lake Tribune photographer Ross Welsher once told me, back in the LBJ era, that "I'd rather have a new Yashica Mat every year, than a  new Rollei every 3 or 4....")  My Holiday sits just about perfectly balanced, on that book shelf, the strap as supple as it was 60 plus years ago.  I held it up to a window this afternoon, put my almost teary - eye next to the red winding window on the back, and fired the shutter.  Quite like the Holga, there was a tiny, very brief flash of red light, indicating that yes, the shutter still works.  Now and then, in a minor fanciful moment, I imagine packing a Domke bag of 127 film, and heading out on assignment with the Holiday.  Looking back at some of the snapshots from those early days, I realize that what we always tried to convince ourselves, that it is more about the vision than it is the equipment, still holds true.  When I go to bed, I'm happy to know that should I need it, my little Brownie Holiday is ready to go.