When Jordan was in high school, she had the most wonderful boyfriend who was as zany as she was.  The  romance lasted throughout high school and they were a perfect pair.  Just to give you an idea, they went to Tony’s prom in prom attire,  but underneath the appropriate prom-wear they had adam and eve costumes, which they revealed sometime during the evening. It was s fun to be with them or just watch them be hilarious, and they were.  We thought it would be fun to go out to dinner with Tony’s parents. Unlike most other kids who would never want their parents to meet, Jordan and Tony thought it was a terrific idea.  And so we went to the local and only OK Indian restaurant. Fun was had by all but the whip cream on the evening was that Donn, Tony’s dad, mooned us on the way home.  We vowed never to give them up, no matter what happened with the kids.  Far as I can remember, the kids never broke up. Tony went away to school, as did  Jordan the following year.  There was no ugly name calling or regrets. They just carried on with their lives. Tony got the award for Best Boyfriend Ever. 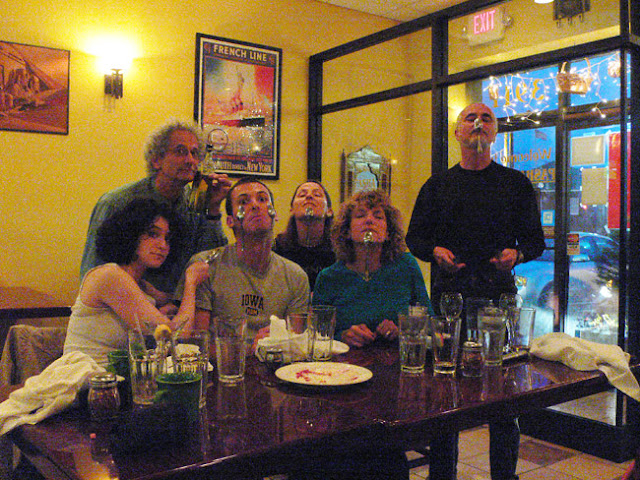 Jordan, Tony and their parents (complete with spoons) at dinner

The parents, (us and Tony’s folks)  vowed not to lose touch.  Although our times together were sporadic, we still had them.  Two weeks ago we discovered that we were all in South Florida, and actually geographically close. We made arrangements to have dinner, but instead of going out we stayed at our apartment and had an almost dinner, but accompanied by lots of laughs and some of Donn’s homemade Lemoncello.  Anne and I remembered when we first met, and I told her that we had lots in common. She was an incredible award winning athlete — biking, swimming, running, and whatever else you do in triathlons. She always won, Donn, the soulmate sometimes placed.  Needless to say, I was stretching the truth.  Run, jump, bike, swim, in a contest —  me?  I think not. Riding my adult tricycle and a workout on the elliptical or treadmill is the extent of my athletic ability. We had a good laugh. And of course, we had the conversation about how we wished Tony and Jordan would get married. Well, I had the conversation. Anne said that she liked Tony’s girlfriend.  “OK, OK,” I said, but I  can dream. We said our goodnights with promises to get together soon.

Anne died in a freak accident yesterday.  She and Donn were driving back from Florida and in Greenville, South Carolina a deer crashed into their car.  It somehow landed on Anne. She died instantly.  This was the report in the paper:

“A 68-year-old woman from Arlington, Virginia woman died after the car she was riding in was struck by a deer on Interstate 85.
The woman, Anne Viviani, was the passenger of a car that was struck by a deer Monday morning. She was pronounced dead at the scene, according to the Greenville County Coroner's Office.”

And just like that, this incredible wife, mother, grandmother, friend, athlete, educator, public servant, joyous human being,  loving life and her incredible lifelong partnership with her husband, was gone.  Two paragraphs in a local paper described the end.  Needless to say, for her family and friends the description of who the was and what her life meant to hundreds of people was more than two paragraphs. A novel perhaps, with many colorful chapters about all the laughs, love and tears she provided for those hundreds of people whose lives she touched.

Now we are left without her, and there is nothing to do but be grateful for having her in our lives. We have our memories of course, but they seem not enough when there should have been so many more.  We are angry and sad beyond words. There are just no words. There are just prayers and tears.  Rest in peace my pal, I for one, among hundreds, will miss you always.   We’re just sayin’… Iris
Posted by Iris&David at 11:25 PM