Your Thoughts and Prayers Have Arrived... 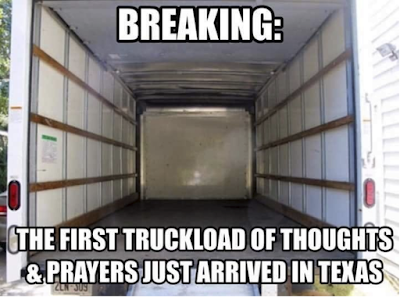 The fabulous Robert Tutman asked me if I had seen the picture of the truck arriving filled with thoughts and prayers.  Hurricane survivors  in Florida and Texas, thought when the truck arrived there would be food, clothing, water, things necessary to survive.  Listen, I am not one to make light of spirituality, but not in place of food and water.  Take a look at the image and then think about how any times you have heard, “Our thoughts and prayers are with you.”

Think about it.  When tragedy strikes is there something we can actually do to make things better.  Let’s take the most recent tragedy because there seem to be so many lately.  The senseless killing of 17 people in Parkland, Florida.  Are your thoughts and prayers with them? What else can you do beside think and pray.  We have seen any number of groups supporting the idea of gun control reform.  How long have these activist groups been at it without much success.  But there is a different kind of activist group in this case.  The voices of our children, the targets.  How can we support them without interfering with their message.

Today I met with an old friend who i hadn’t see in about 50 years.  He was a year older, which came as a surprise, because I thought he was a year younger. That being said he was still one of the Jewish kids who always had to stand in the back of the room when everyone else sang Christmas carols.  It was great to catch up. He is living not far from me in Jupiter.  Here is another case of the wonder of Facebook. He saw where I was and got in touch. He remembered when he and my cousin Stevie ran away from Bar Mitzvah practice. They did it every week and ran down the block to the Y. But on one occasion the Rabbi came after them and Stevie, being a big biter, bit the Rabbi and hid under the ping pong table.  Oh that Stevie!

Helping people in need is no joke, though often fleeting. People most often think about doing something good on holidays.  Whether it be a coat drive in the winter. A turkey at Thanksgiving. Food and Toys for Christmas. or Chocolate eggs for Easter. In our family, charity or tzedukah happened all year long.  From what I understand, it started in the shtetls. On Friday the Rabbi would go house to house with the tzedukah box. If you were a family in need you took money out of the box. And if you could afford it you put money in the box.  It’s just how things were, and how this little corner of society tried to care for its own.

For the Catholics, (and I love these),  it is the seven corporal works of mercy:
To feed the hungry.
To give water to the thirsty.
To clothe the naked.
To shelter the homeless.
To visit the sick.
To visit the imprisoned, or ransom the captive.
To bury the dead.

People did not pull up with a truck loaded with thoughts and prayers.  If I ever say that again, I will always have the picture of the truck in my mind.  A Well intentioned, yet without much substance, thing to say. Amen