On the eve of the Eve, I received some sad but not unexpected news. Robert L "Bob" Williams, 93, passed away today after a long illness, and a very full life. Bob grew up in Kentucky and Ohio, joined the Army early in WW2, and ended up as a paratrooper with the 101st Airborne Division. They are the guys who jumped into Normandy the night of June 5th to secure the areas behind the beaches -- where the landings would be the next morning - D-Day, 1944. As a kid of the 50s, I knew a lot of history, and knew a great deal about WW2, though it was a long time before I figured out that those soldiers I'd heard of, and seen in the movies - "To Hell and Back," "The Great Escape," and "The Longest Day" - were also Chesley the pharmacist, Toke who sold lawn mowers, Howard at the clothing store, and Dick who I flew model planes with. They were the vets who had regained their lives as civilians, and in some cases shared their stories, but in most cases, you had to pry it out of them. After the French Presidential elections of 1974, when I ended up working as Giscard d'Estaing's personal campaign photographer, I found myself in Paris in early June, at the time of the 30th Anniversary of DDay, and wanted to go the "debarqement" beaches in Normandy. With Tom Herman and Robert Wiener, Paris denizens of the time, we piled in a car and headed to Omaha Beach, unaware of what we would find. We spent the next few days meandering the beaches, meeting vets, seeing Omar Bradley (the last of the 4 star generals in his last appearance at a reunion) and early in the morning of 6 June, 1974, hired a local French fisherman to take us out into the fog, off shore a mile or so, where the landing craft had come. We wanted to try and see what they saw, though obviously without the live fire and hellish welcome. We went to Ste. Mere Eglise, a small inland town where dozens of paras fell before they even had a chance to fight. It was a moving experience, and without meaning to, it began what became an every 5 or 10 year effort to spend time with these wonderful veterans. (I returned in 1979, 1984, 1994, 2004, and 2014...) Each time I came back, I would try and get a magazine interested in doing a story. The usual response would be something like "we don't do Anniversary stories..." and yet on every trip, once I got to France (often starting in former bases in the UK with the vets...) some one, usually TIME would want my pictures. Thing is, as a TIME story noted in 2004, in the crappiest days of the Afghan and Iraq wars, "Why D-Day Matters" was one of those pieces which tried to explain the elemental greatness of what became Tom Brokaw's "Greatest Generation," and attempt to help us understand ourselves.
In early 1994 I became aware of the fact that a number of 70+ year old WW2 vets, paratroopers, in honor of the 50th Anniversary of DDay, wanted to jump again. Out of a perfectly good airplane. It was their way of saying how much it had all meant to them. The Pentagon of course was worried that there would be a headline like "8 DDay Paratroopers Die In Parachute Accident..." and you know thats what formed their position on accepting the jump in the first place. Ergo, each trooper had to have 5 certified jumps (and none of them was under 70 years of age, with several way beyond...) that year to prove they wouldn't be a liability to the festivities. So it became known that the vets would jump again around June 6, in a large farmers field not far from Ste Mere Eglise. It would be quite the show. 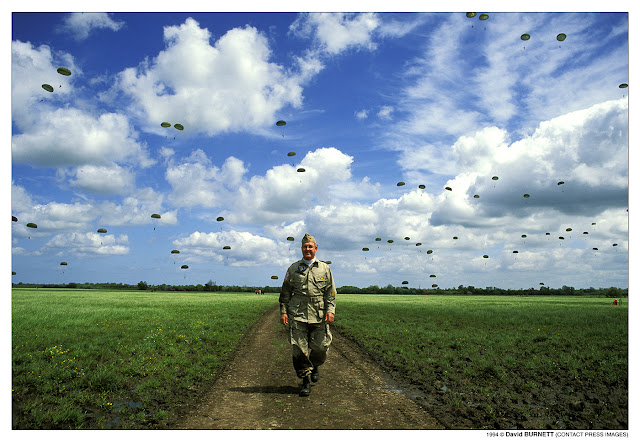 I always enjoy your posts, Mr. Burnett, thought I have to admit it was a little odd to see my name (Robert L Williams) in the second sentence. I'm sorry that you received sad news on New Year's Eve, but thanks for sharing the story. Best wishes for a happy New Year.