A Face In the Crowd

Just about a year ago, we got a call at Contact Press Images from a caller in Illinois. He'd seen a picture online, and was trying to find out more about it, and get a copy of it. Per usual, the office quoted him a price, and almost as an afterthought sent me a note with the name of the gent, and a very brief description of why he'd called. It seems he was IN a picture I'd shot years before in Vietnam, and was hoping to get a print. Well, as someone who has carried the decorative sash "Not a Bad Photographer, but Sometimes a Terrible Note Taker" for years, I jumped at the chance to talk to yet another of the persons who had anonymously been in one of my pictures, at a time when I certainly was anonymous to the people in the picture. Our little clouds hovered above a fog of anonymity. The situation was this: Christmas Eve 1970: Phu Bai, Vietnam, home of the 101st Airborne Division. I was a newbie having been in country about two months, still wandering around with something approaching a goofy blank stare on my youthful face, in search of pictures, but not quite sure, I realize now, that I'd recognize them if they jumped in front of me. I had stopped in Phu Bai that day for a few hours, en route to the Alpha 4 basecamp at the DMZ (aka Con Thien), to photograph that year's version of the "Bob Hope Entertains the Troops" tour. With Joey Heatherton and a bevy of young beauties, his hat brim flipped back like an off-duty Spec. 4 might wear, Hope entertained a large crowd of screaming grunts for over an hour. Because I had a chopper to catch to the DMZ, I didn't have the chance to stay till the end. 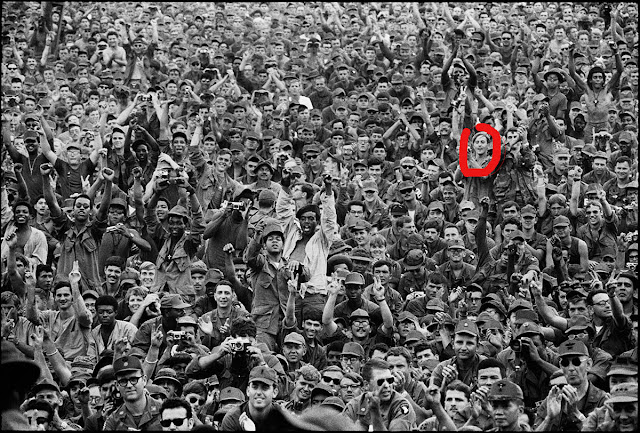 Terry in the crowd at the Bob Hope show (1970)
Later that night, amid some yuletide illumination round flares, and mud up to my shins, I hung with the soldiers of Alpha 4 as they celebrated Christmas in the manner usual for troops on duty. For years, one of the photographs of the soldiers' audience at the Bob Hope show has intrigued me. So many faces, so many expressions. Who were these people? I'd hoped that somehow I could meet some of those guys again, in what is now 45 years later. In an email from the guy in Illinois, there was a phone number, and I didn't waste a lot of time - I called him. Terry answered the phone, I said I was the photographer of the Phu Bai "Bob Hope" shot he'd seen on the web, and for the next few minutes there unfolded a very emotional story. Each year, he said, around Christmas, he gets to thinking about his time in Vietnam, and especially his buddies. (In combat, you don't really fight for God or country, you fight for your buddies.) He said that he couldn't sleep, and in the middle of the night, got up, went to his PC and googled "Bob Hope Phu Bai." My picture immediately appeared, that Christmas Eve in Vietnam. He looked at the picture for a minute, and realized he was IN it. One of the few men standing in a crowd mostly sitting. No question. It was him. As he recounted the story to me, I could hear the welling up of emotion and tears, as if the sudden connection to someone else who'd been there that day was the closing of some kind of circle in his heart. We talked for a while, he told me how he'd been there quite by chance, that his actual base camp was the same Alpha 4 I was headed to that day, but he'd won an impromptu lotto the Sgt. had arranged to send two guys to see Bob Hope. In the moment of that conversation it all seemed as if it were meant to somehow be. I told him I'd send him a print ( a nice b/w 16x20) and he said "if you get to central Illinois, I'd love to come and say hello...." 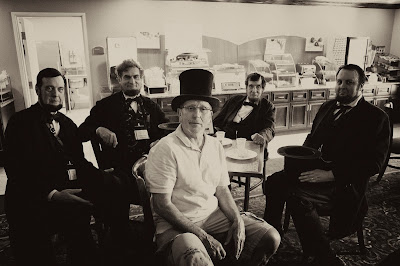 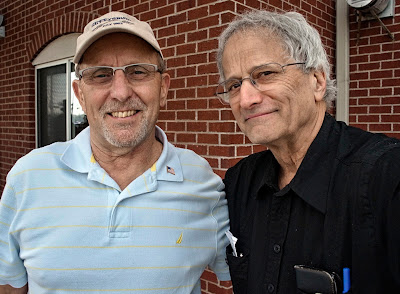 with several Abe Lincolns, and with me, (2015)
Four months later, while in Vandalia for the Abraham Lincoln Presenters convention, I called Terry. A couple of hours drive for him was nothing, and he drove down and met me (and several Abe Lincolns!) for breakfast. So seldom when you are a horrible caption taker like me, does fate award you the chance to actually catch up with a subject again, let alone forty-five years later. But tonight, as I think about that moment where we crossed paths in the middle of a crazy war, I am grateful that for at least one man in a crowd of several hundred, we were no longer just two anonymous souls. And as the 20 year old grunts of Alpha Four might say .... "Merry Christmas..." D+45 Years
we're just sayin'... David
Posted by Iris&David at 1:09 AM

Terrific story. Thank you for sharing.

what a beautiful story...you just never know..in the crowd of many, we're each an individual soul. Thanks for sharing this story with us.