There is something quite extraordinary about today.   The numbers 9/11 (always pronounced nine-eleven) will never have another meaning for those of us who were of a certain age — anyone over 10 I suspect — 13 years ago.  Our friends and colleagues in the city have each a story as riveting as the next.  It was the day that horror visited the country on a scale not known by anyone who wasn’t old enough to remember World War II.  Listening on the radio to MSNBC’s live minute-to-minute rebroadcast of the Today show of that morning retold the story in a way that I don’t think I had yet understood.  When you know what is coming - after they speak about a plane hitting the North tower - when you know that all the rest that is to follow will come no matter how many times you might want to turn the radio off, it is chilling, even 13 years later.  There is a reality, a sense of doom which the listener brings, as if you want to yell back at Katie, Matt and Tom, and tell them what is about to happen.

Unlike most of my family and friends, I was in quite a different place that morning.  I had just spent my birthday a few days before in Istanbul, courtesy of ESPN the Magazine.  I was covering a cool story on how the NBA, having exhausted nearly every local American  high school gym in a search for new talent, was taking its clipboards to Europe, the setting being the European Basketball Championships.  In a large, oval-esque sound chamber, a dozen highly rated teams including Spain (Gasol) , Germany (Nowitzki) , France (Parker), Turkey (Türkoğlu), and Yugoslavia (Stojakovic) battled each other not just for the prize at hand, but to be seen and coveted by the likes of Greg Popovic of the Spurs, in hopes of landing a juicy NBA contract.   Yugoslavia (Serbia, Bosnia, Croatia, Montenegro….the modern break-up former republics) has for decades been a hotbed of basketball activity.  I remember the 12 year old kid in Sarajevo who, in 1980 quizzed me about a guy I don’t think I’d ever heard of (mybad, it was Magic Johnson) and couldn’t understand why I wasn’t totally up on Magic’s stats.

The matches were held at night, usually after one of those amazing grilled fish dinners near the water, which reminded you that Turkey really was at the crossroads of the worlds East and West.  The cheering  sounds resonated in the gym like few I have ever heard.  The semi-final game, in which the Turks beat the Germans  79-78, was absolutely the loudest sporting event I have ever attended. I suspect some of my tinitis - those never ending gongs which ring 24/7 might have been seconded by those screaming crowds.  The final saw the Yugoslavs win in a close game against the Turkish hosts, and frankly, it was about the first good thing to happen to Yugoslavia in years.  Coming on the heels of the long strife of civil war, and US/NATO intervention, it gave the Yugoslavs something to be happy about.  With writer Ric Bucher (now a SF based NBA expert) we hopped on the Belgrade bound flight with the victorious team, landing in the middle of a rain storm.  But rain or not, nothing would keep the cheering Yugoslav fans away from a celebration of the victory.  It was as if that winning game had somehow allowed the country back into the fraternity of Europe.  After all, just a short two years before, NATO planes and American cruise missiles had pummelled the city in an attempt to take Yugoslav TV off the air, but missed, and hit the Chinese embassy.  Firing cruise missiles, even with their purported accuracy, in an urban setting doesn’t always produce the results advertised.

The party went into the night, and Ric and I visited the Belgrade Press club for a beer, then hit the sack after a long day.  Early the next morning we met a car and driver to take us to the  Kopaonik ski resort near the Kosovo border, where the well known and highly rated Partizan professional basketball team was finishing their summer camp before the start of the fall season.  There, amid a foggy, chilly mountain air, a dozen incredibly tall shooters were in the gym  practicing their drills hour upon hour.  I photographed a few of the players, those likely to be seen as NBA prospects, even though they were too young (mid teens) for being signed by an NBA team.  They included Nenad Krstic (who eventually played 7 seasons  for the Nets,)  Nemanja Matovic who stayed in Yugoslavia, and a 15 year old 7-foot  wunderkind, who had a special waiver to practice with the team at that young age.   We sat and talked that afternoon with the coach, one of those slow going conversations which mostly required an interpreter as his English was pretty bad, and our Serbo-Croatian non-existent.  At one point his mobile fone rang, and he picked it up, exchanging a few words with a caller before flipping the fone closed.  A few minutes later, the fone rang again, this time a more worried look coming over his face.  When he hung up, he said “a plane has crashed into a market building in New York.”  I suppose there was something in the translation of “Trade Center” to “market” which gave the meaning a diminished effect.  Hey, we know planes crash all the time. This didn’t seem to be terribly grave.   The third time the fone rang, the countenance of his face just shrunk around the corners of his lips and eyes.  This was something serious.  The conversation moved on again, and he explained that to him, though he didn’t know exactly what had happened (none of us had seen any TV yet) he wondered if it might have had something to do with those cruise missiles of two years before.  He lived across the street from the Yugoslav TV building, the one that had been targeted by NATO, and obviously still felt the angry pangs of someone who has been bombed.  Ed Murrow once did a radio report in 1940 about RAF flyers returning from Dunkirk, having been shot down over the beaches, catching a ride back on an evacuation boat, then looking for another Spitfire to fly.  He described the young flyers, in their leather jackets, looking chilled from the Channel, and responding to his questions with loud, almost screaming answers. One of the other pilots remarked,”.. you get that way when you’ve been bombed for hours.”

I suppose our friend the coach had lurking in him a certain sense of deja vu as he described to us, representing the former bombers of Belgrade, what he’d heard from his friend on the fone.  He then offered me his fone, and I called Iris, at home in Arlington, VA.  “There is no more World Trade Center,” she said, saying it as plainly as was possible.  I still didn’t get what that meant, but knew that I still had work to do, and spent the rest of the afternoon shooting pictures of the Partizan players before heading back to Belgrade that night.   Once in my room, and pursued by curiosity, I flipped on the TV to see, over and over again, replay after replay, video of the planes hitting the buildings, and the towers crumbling to earth.  At that moment, I finally understood what she’d been trying to tell me.  But hearing about it from a man whose neighborhood had been bombed by American cruise missiles gave me a slightly different perspective.  He wasn’t happy, he wasn’t gloating, he may even have been in as much of a state of surprise as we were.  But I never have forgotten that in the end you need to put things into perspective, and that there isn’t just one point of view, one way to see things.  And now, 13 years later, facing another threat as ISIS becomes the public face of terror in the world we’re inhabiting, and no doubt another generation of young 7’ Serbian basketball players is trying to make a place on the world stage, it seems as if we haven’t gone very far.  Will this be the state of the world for the future to come?  Will there be no end to the ugly habit of man to take this singular planet and wrack it with ruination.  I hope not.  I’d love to see a place where the next Serbian wunderkind can find a place to play, a place we can watch him sling a skyhook into a giant arc, hitting nothing but net. 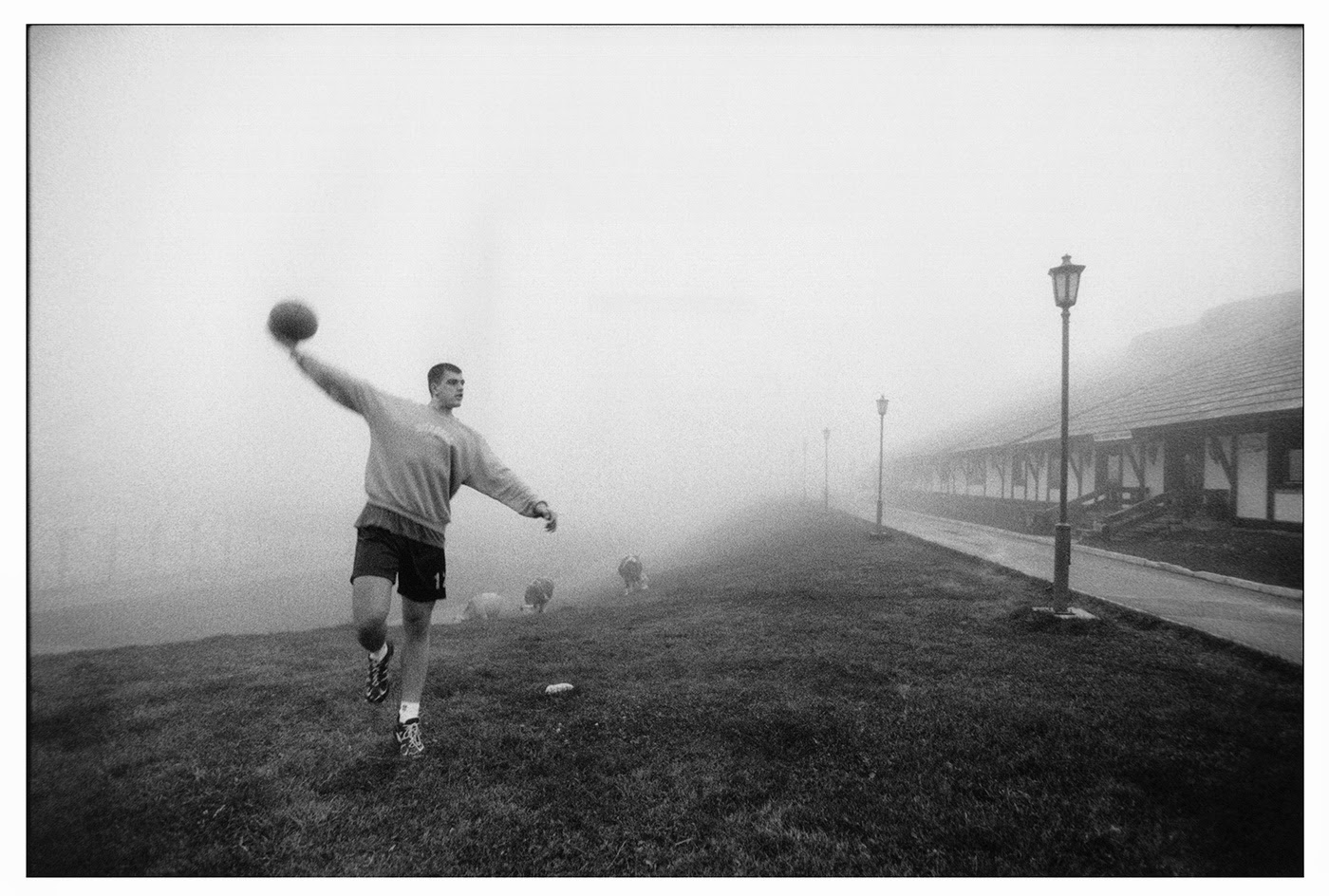 Met you at the London Olympics bus, while you were hauling your Speed Graphic camera. You were taking selfies, I'm probably in some of them. I didn't know I was with you 11 years prior to that in the plane that took us with the Yugoslav team from Istanbul to Belgrade. I've had no idea you were in Belgrade on 9/11. I was there too, and can clearly remember typing away on my laptop, when a friend called me to switch over to CNN. The rest is (sad) history...