And Then There Was Sochi

In October of 1960, three years into the age of Sputnik, the space race, the math & science race, and a dozen years into the Cold War, the Soviet Premier, Nikita Khrushchev came to New York to speak at the UN. He demanded the resignation of Dag Hammarskjold, then UN Secretary General, and a few days later made what those of us in the 8th grade thought was the ultimate bullying threat. He took off his shoes during a speech by a Philippine delegate (who had accused the USSR of imperialistic maneuvering in Eastern Europe) and pounded the shoes on his desk.  Sitting comfy at home in Salt Lake, I took those threats seriously. I mean, who takes their shoes off and pounds them on a desk at the UN?  All the more so that Uncle Max (born in Russia, he was somehow my grandfather’s cousin, via one of those first/second marriage schemes which we later well understood about our Mormon neighbors, but less so in our own Russian roots from the 1800s) had come for dinner that Sunday.   He would have been in his 70s, still drove his Nash (the first reclining seats) and always arrived with a fresh roll of Cherry flavored LifeSavers, sharing them gleefully with the kids.  Those LifeSavers seemed to us to be way more amusing than the schmushy wet kisses the great-aunts proffered.  Though it had been years, Max still spoke and could understand his native tongue, and before the UN translators had begun their rather diplomatically monotonic translations, he was telling us what Khrushchev was saying.  It wasn’t really anything I wanted to hear. 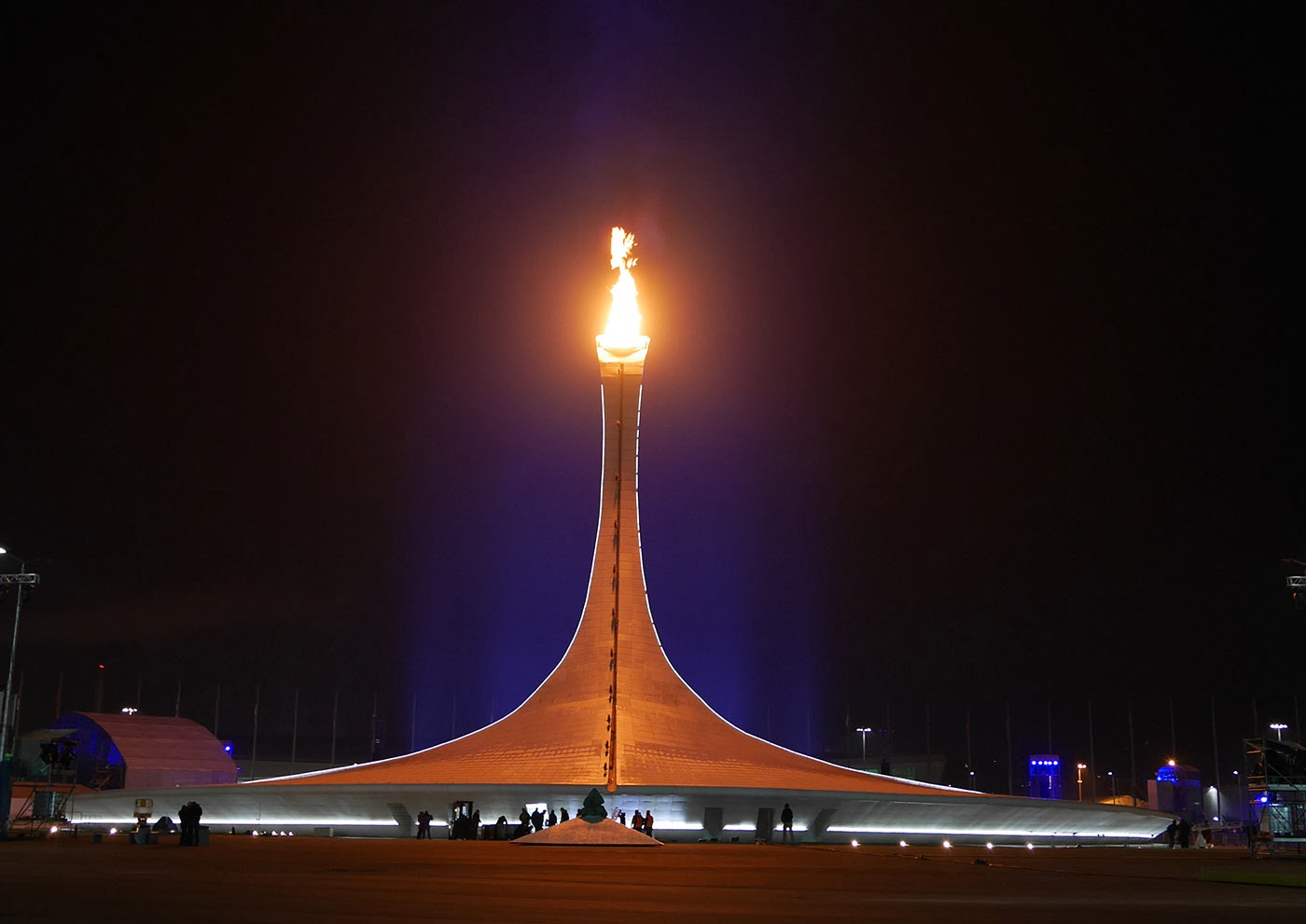 I’m sure there were meetings in the Kremlin where the discussions centered around how to freak out Americans (decades before the term was in vogue) and just what kind of behavior would be not only acceptable, but play a certain role in making a threatening Soviet case to the West.  Of course things never go just as planned, and it was widely reported, although I forget by whom, that when Khrushchev first entered the Waldorf-Astoria elevators, zooming to a luxurious top floor suite, that he couldn’t understand why the elevators didn’t lurch wildly like the ones back home.  It was a time when every 13 year old American kid, especially one like me who’d spent several 4th grade afternoons staring west out of the Oakwood School windows, trying to see if we could see the ‘flash’ from an Atomic bomb test several hundred miles away in Nevada, pondered whether or not our fighters (F-102s) could shoot down their bombers (M-4 “Bison”) should it come to  a real confrontation.

How it is possible for a lifetime to have passed by so quickly, I just don’t know.  I am now about the age that Max was when he came calling with the Lifesavers, and aside from a few stock Russian phrases (Spasiba, Orchin charasho, and Smotry! Volchunuk*) I am limited to nods, smiles, and the occasional French  “Pardon” to maneuver through the Sochi Olympic world. It is a Russia far different from even a few years ago.  The place is staffed with thousands of “volunteers” - the key to any successful Olympics, and they are by and large, smart, multilingual, helpful, eager to converse, and full of what I have to take as a hopeful sense of what Gorbachev called Glasnost and Perestroika (a two sided sense of increasing openness and reliance on the people instead of a centralized government for the propulsive energy of the society.)  I suppose Gorbachev is seen as the guy who let everyone down by dismantling the Soviet state, but as tough as it must be for many people, you have a sense that for a lot of Russians, they see a chance to succeed for themselves which rarely existed in the old regimes.  It is probably hardest on the folks my age who came to terms with the status quo in the 50s and 60s and probably thought it would never change.  All this stands in the face of those early press reports about the craziness of the not quite finished bits of the Sochi Games:  Toilets either 4” off the ground, or 4 feet,  rooms with doors that didn’t open, and stray dogs wandering through nearly finished buildings.  In the end, it all seems to have come together in a way that is surprisingly efficient, and pleasant.  In three weeks I have yet to meet anyone seriously contrary. I know that everyone is ‘trying harder’ but I have to say that what I have seen of the young people on this trip is impressive.  As opposed to our own kids, in addition to understanding how to program a cell phone, and operate in the neo-digital space we inhabit, I suspect more than a few of them know the names of the Bolshoi Prima Ballerina, and probably of a few modernist poets.  We are each, in fact, a product of our times, and I cannot forget the ongoing admonitions of Boris Badenov to Natasha in the classic  Rocky & Bullwinkle cartoon series of the 1960s: “ What about Moose and Squirrel?”   If that can be the worst that is said of our two cultures, then we will all be the better for it. 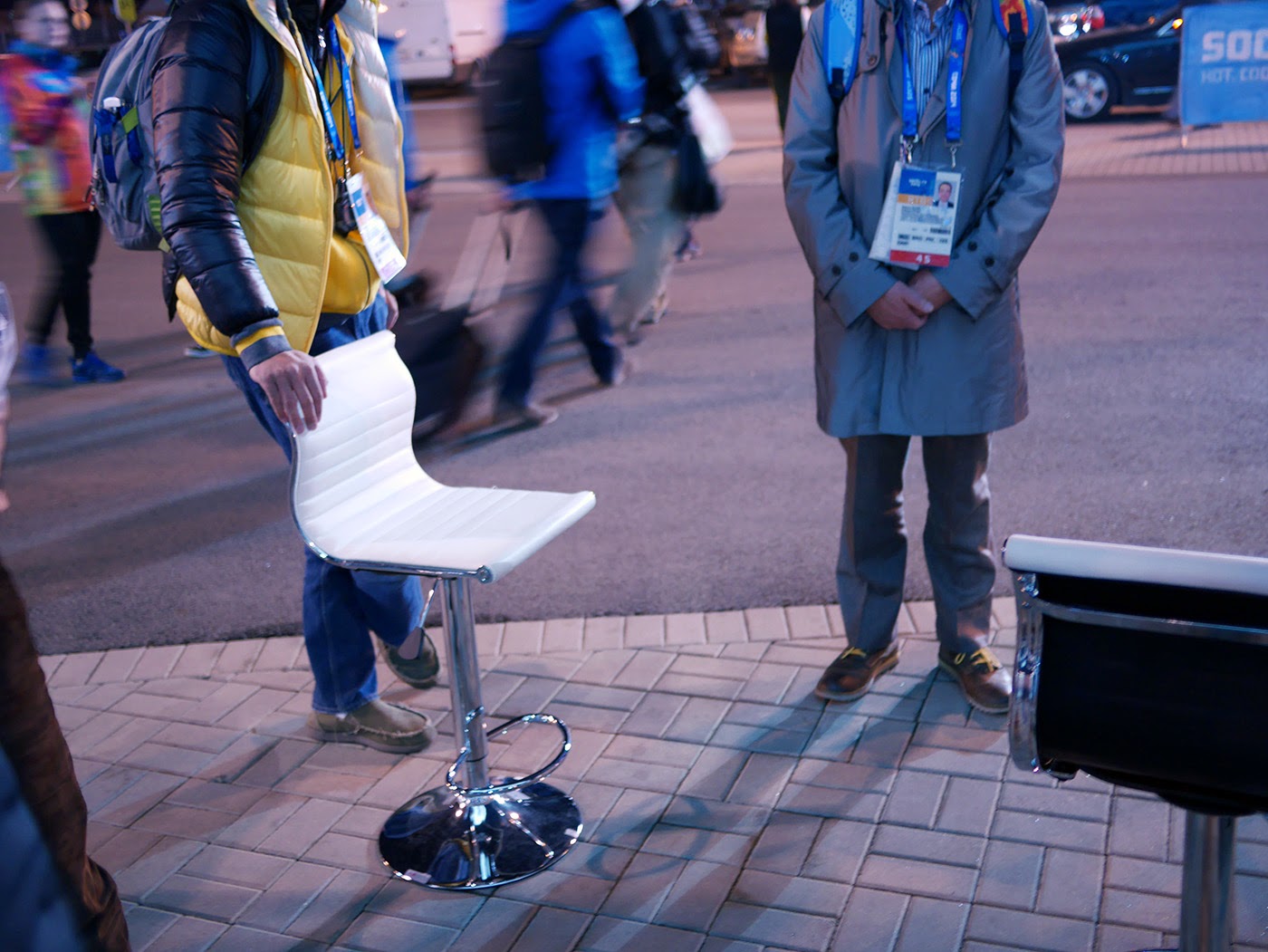 you know it's getting near the end when the reporters take their chairs out of the arena
I can only hope that going forward their kids and our kids will have the same kind of chances to meet and mingle that we have had this month.  Beyond the excitement of the athletics, there is a wonderful quality of shared experience which the Olympics gives us, millions of viewers, thousands of in-stadium spectators, and that is something to cherish.  To hold on to it beyond the three weeks of the Games, aye, that’s the key.  But it’s worth being reminded every two years that these kind of rare get-togethers produce far more than mere glittering gold medals.  It’s the Gold Medal of the heart and soul which counts, and this week, I think there have been a lot of winners.  We’re just sayin’…. David

Every time I read one of your posts I always wonder, could he have been an even better writer? But then again, you are both. That's a no brainer. Thanks for the lovely post.

Max and Khrushchev were both mysteries in their own way. I always thought Max was your great-grandfather's half brother, but maybe not. He was a rag dealer, which is probably as honorable a profession as any. His wife was Esther, but he always called her Sweetie. My memory is that she was about 8" taller than Max.

Your coverage of Sochi has been terrific, We're looking forward to the pictures.

David, I was a volunteer at Sochi, well actually Krasnaya Polyana at the Ski Jumping venue Russki Gorki, where I met you. We had a very pleasant conversation about.. well, about just 'life' in general. I am little older than the other volunteers which you pleasantly engaged and later participated in a 'selfie' with them. I left thinking about what a pleasant chat we had and your perspective on our discussion was refreshing. Thank you.

Great posts, and i love your Olympic photos. I was a physio with one of the teams at the games, so took various photo's from inside of an Olympic Team. But admire your approach, you even captured some of my athletes.