How Do You Pronounce "Cholent"

For those friends and fans who have been e-mailing us (you KNOW who you are!) about our "Cholent" , the recipe and the cooking time and temperature, I am going to share our magic recipe - straight from the "Gefilte Fish Chronicles Companion Cookbook.” But first, here's one comment I thought I would share for reasons that will become obvious, as well as cover a multitude of other questions:

“I'd never heard of this specific dish, being Gentile and all, before Dave's (Facebook) Post, but am likely to try it. Some questions, Iris, since your husband likes mush, but at what stages are the potato root vegetables, greens, beans, onions added to the pot of long simmering meat?"

And now friends, direct from the GFCCC:

CHOLENT IS NOT FOR AMATEURS
Dubroff Cholent (There are other kinds but we are purists - meat, potato, onions, matzo meal stuffing).
Take 45 pounds of good beef chuck, carefully examined at the butcher or the supermarket. Bring it home, cut it into chunks, and layer it in a pot the size of Miami with quartered potatoes and a big ball of stuffing made of matzo meal, eggs and schmaltz (chicken fat). If you use 5lbs of meat the pot can be smaller but use the same seasoning and technique. The meat should be seasoned for taste with sliced onions, potatoes, salt, pepper, steak seasoning, and paprika - which has no taste but adds color. The stuffing recipe will follow.

Layer the meat, potatoes, onions. I can't tell you how many layers, it depends on if you use 5 lbs or 45 lbs of meat. But keep layering till you’re out of things to put in the pot. Cook the meat and potato in a 200 degree oven for at least 17 hours.
If you need two pots the size of Miami and you don't own a catering business, one of the pots can be placed on the stove top and after 12 hours, and 30 or more discussions, can be switched with the help of two weight lifters and a supervisor.

Cholent Stuffing
Melt four sticks of margarine or an equal amount of chicken fat, throw in 2 nice chopped onions. When they glaze add matzo meal and maybe a little cake meal. Pour into a bowl and make sure it has taste - not easy with that much 'meal' Measure 2 cups at a time stirring constantly – and before it gets too thick mix in an egg. It's a lot of work to get that much chicken fat unless you buy it at a kosher grocery where they sell lots of fat chickens. Salt and pepper to taste. Mix in as much matzo meal as it takes to form a baseball-sized ball. Then freeze it until you are ready to layer the meat, onions, potato, (see above) meat, onions, potato. No matter the number of layers, the stuffing is the top and last layer.
If you want to drop by, you are too late for the gefilte fish, the horse radish, the chicken soup, chickens, and matzo balls, but we will be layering tomorrow night. Or, just order a cookbook from our website www.gefiltefishchronicles.com. 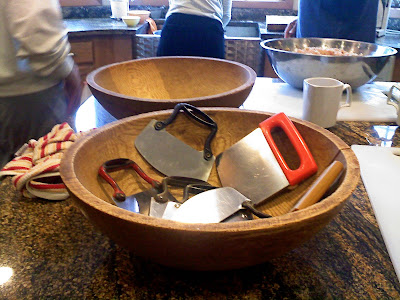 the hockers for Gefilte Fish
Passover is a very special time for all of us. Most of us no longer have the Dubroff surname, but without exception, every member of the Minya/Avrum clan, has a Dubroff heart. And what that means for me is, that I am never happier then when I am surrounded by cousins, cooking, and chaos. We laugh and cry and do silly things -- like yesterday while hocking fish, and cooking for nearly 8 hours, the only conversation we were allowed to have had to be based on dialogue - verbatim - from the Chronicles Documentary. (the family is required to know every line in the show.) 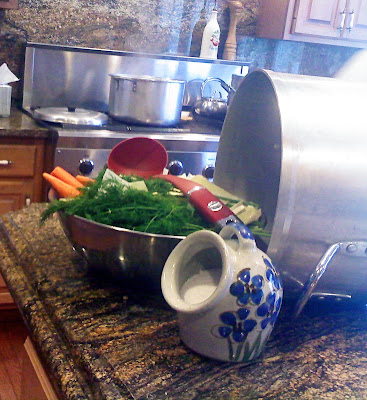 the makings of a monumental chicken soup
Friends are always welcome and strangers are never as strange as the family is. This year, Rosie (my mom) died. We sold our house and, after 30 years, have transitioned back to New York. I changed careers and am producing musical theater - like "Gefilte Fish Chronicles the Musical." We have our apartment in NYC, and purchased a house in Newburgh N.Y, where half my mother's siblings lived for all of our growing up years. (the other half in Boonton N.J.). In a way, our move has brought the Dubroff family full circle - the twain between Boonton and Newburgh, has finally met - with us. Aunt Peppy is still giving advice, and as she says in the "GFC," we may all be in different physical geographic locations, but in our Dubroff hearts, we will all be together, having Passover as usual. We’re just sayin’… Iris
Posted by Iris&David at 9:02 PM

Iris and Jeff,
A toast to your Mom, as you celebrate Passover.
Mary Lou