Al. Al Jazeera, That Is

Since even before 9/11, nearly ten years ago now, there has been in this country a rather biased view of most things Middle Eastern. (Or as you might know it in German “Nahe Ost.”) My oldest memories of anything having to do with the Mid East is a mention of “the fertile crescent” and “Mesopotamia.” Probably it was the fourth or fifth grade. There was some kind of exoticism about this part of the world, and of course living in Utah, you were never very far from some mention of the “holy land.” But it all seemed like it was about another era, another time altogether, none of which really seemed like something that a kid from Salt Lake could really relate to. Of course you never really know a place until you put your feet there, walk around, and check it out for yourself. That wasn’t something I was able to do until the late 1970s when I had a series of trips to Egypt, Jordan, Syria, Lebanon, Israel and later, Iran. In Egypt, in particular, I found the most wonderful, warm, and welcoming people. When you come from a place where you have much, one of the first things you do is compare what You have with what others do. It almost a subconscious thing, and I don’t’ mean only material things. But in Cairo, in the late 1970s, I found a very friendly and gregarious populace, most of whom were trying to see how Anwar Sadat’s perestroika with the Israelis might improve their own lives. And there wasn’t much improvement unless you were somehow tied into some big govt. contracts, or US aid money. For the guy hawking trinkets in the souk, or a kid carrying a tray of hot mint tea to a rug dealer, your life probably didn’t get a whole lot better. In fact when Sadat was killed by a group of renegade gunmen, during a military parade review, I flew to Cairo for what many of us incorrectly thought would be a huge outpouring of Egyptian grief – like the famous images of the Nasser funeral a dozen years before. In fact the people who were most bothered by his passing were the American and Israeli diplomats, and big time journalists who had counted Sadat exclusive interviews as real breakthroughs (Cronkite, Barbara Walters…) 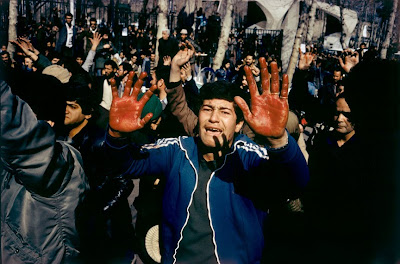 
In the streets of Cairo there were modest examples of mourning, but not what any of us had expected. And by the second or third day after the funeral – one which saw all the visiting dignitaries in lock step, walking at full speed and surrounded by so many security people that it looked like a mass of ants rather than the diplomatic corps. The only photographer to even make a picture of that marching ensemble was David Rubinger who’d talked his way onto a TV camera platform and was able to shoot over the heads of the security detail. Most of us were scoreless. And so it was probably a good thing that three days later, after more grousing than was proper by the press corps, that the Sheraton Hotel Casino re-opened, enabling otherwise unaccomplished journos to try and make a few real dollars. I confess that I had a good night in that casino, winning about $500 bucks at roulette (then about two day rates).. and on my way out of the room at 2am, put a final $10 on ‘33’ only to see it come up and add another $350 to my pot. That moment provided the week’s only dramatic flourish. I made one picture that week, and in to me it embodied the absolute apathy which I found in the Cairenes. So removed from what we have seen the last three weeks. 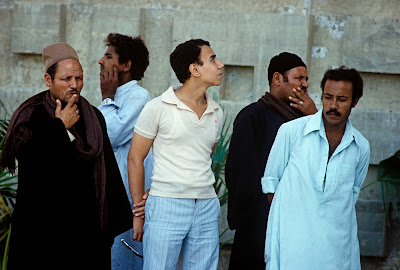 October, 1981, Cairo
Something has come alive. And given how many people showed up, and the number of demonstrators who wouldn’t be denied, the few injuries in both civil and 4th estate quarters were surprising, as it could have been much, much uglier. To our western minds, there is never any excuse for what happened to those news crews last week, unless you count the stomping of a woman at a Rand Paul rally in Kentucky last fall before the mid-terms. Well, she wasn’t really a press person, was she. So I guess that doesn’t count. But I suppose if the Egyptians have the same sort of errant view of us, as we very well might of them, then is there any reason for surprise that for the past three or four years, there has been a seemingly calculated plan to keep the Al Jazeera English TV network broadcasts off American cable channels. Yes, a few cable systems here and there (well..not HERE, but maybe There) did take the feed, and as it happens the people who watched their coverage were probably THE best informed about what was happening in the anti-Mubarak demos in Tahrir. For years, no one would touch Al Jazeera. Pretty much in the U.S., no one would touch anything which started with Al, for that matter. They thought they would be funneling the devil’s own news channel into the American heartland.

Then things broke loose in Tunisia, and a few weeks later, in Cairo. And, and, and. It does seem like it has a certain momentum. And today in Tehran, street battles reminiscent not only of last year’s post-election confrontations, but those of 30 years ago which I photographed during the Revolution of 1979. And yet for the deepest, and broadest coverage, watching Al Jazeera English service provided so much more information and background than any of the US channels (no surprise here, but still surprising.) And in the end, it has all come full full circle. In fact, the circle may even be a double rainbow style set of loops. Today, following the street demonstrations which supposedly didn’t happen in Tehran, the Iranian government shut down Al Jazeera in the country. I had to laugh. Al Jazeera can’t win for losin’. Although it’s done wonders all of a sudden for their American exposure. Their viewer ship is up in the hundreds of percents, and as it should be. It’s another news network, in English, with lots of money to send people (good people) out to do stories, and can it be any worse than CNN or Fox? I don’t think so. And when the Iranian regime today joined the ranks of wacko Rightwing dingbats, and other people in this country and shut down the Al Jazeera feed, it was a kind of closing of a perfect circle in this crazy world we inhabit. It was as if anyone with a real window on the truth (ok, the Al Jazeera English version of the truth) but a window nonetheless, was going to end up befuddled by local constabularies.

No one is quite sure, including both demonstrators and despots, where this movement is going. In 1989 it started with a crack in the Berlin wall, and spread quickly across Eastern Europe in what my pal Tom refers to as the “End of Communism” tour. This may not be the end of or beginning of Anything tour, but then it might be. And if you can watch some of it on a channel who actually speaks the languages of the street, you just might understand what all the hoopla’s about. We’re just sayin….David
Posted by Iris&David at 2:25 AM

from James Kegley: Washington DC
David,
I saw your post and as thinking how funny it was I was in Cairo as well when Sadat was shot. I was there to swim 2 marathon swims...we had completed our first in Port Said in the Suez Canal and were back at El Nil Hotel, a 3rd rate place. A tall swimmer named Sultan Kigab from the Sudan who was always telling tall tales came running in the lobby and yelled "Kigly, Kigly, Sadat has been shot!" I called BS and he told me to look outside where I saw army trucks whirring past in the streets. We walked up to the hospital which was surrounded and sandbagged by army trucks until I guess they had it all stabilized and then announced Sadat was dead. My recollection (I was 14 years from developing an interest in photography) was of the next few days when the country was "in mourning" and the streets of Cairo were quiet as a winter morning, shops shuttered and no cars at all out. We then got paid for lost income from our second race in Egyptian money, and had to exchange on the black market in some seedy unoccupied building. From there the 2nd race, cancelled and a pocketfull of counterfeit bills, I took a shared taxi crammed with families and flies to Hurgada on the Red Sea. and then Luxor. I was amazed at how peaceful the transition was. But then again, I was not there to capture history, but to swim into an adventure which I found.