Never Too Late To Learn

Remember the Beatles song that started, “When I get older, losing my hair.. many years from now..”….. well folks – yes, it’s that birthday, but I still learn something every day.

Today I learned that having supportive, loving friends/family is totally wonderful. And just how did I learn this? First of all, we went to a family wedding last night. It was a nice wedding. And the kids were so happy. But that wasn’t something I learned –I already knew that. What I learned was that, no matter how old you get, being with your family just keeps getting better and better.

When you are a child, it’s nice to see relatives -- occasionally. When it happens, you usually have a good time but you never think – I just can’t wait until the next occasion to see all those cousins again. If it happens, it’s nice. If it doesn’t, you figure it probably will sometime down the road – but it’s not necessarily something you know you will miss if it doesn’t happen soon. What I know now, is that I will feel an absence not seeing my cousins and my mother’s twin sister. It’s too bad we don’t know that when we are young, but yesterday I learned that it is never too late to have the realization. 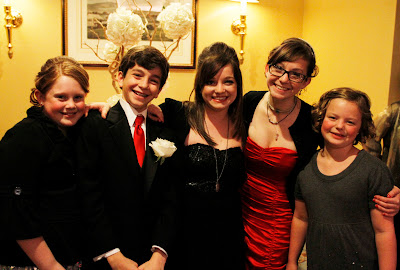 the kids cousin brigade
The correspondence I received today was, for the most part, loving. Friends from all different times in my life sent messages and wishes for a happy birthday. Note, I said for the most part. Allow me to explain (Of course, I knew you would). For the last few weeks I have been sending notes asking for tax deductible financial support for “Gefilte Fish Chronicles: The musical – which I must say is going to be a real winner. (Yes mom, I just spit three times to avoid the evil eye.) I decided, however, not to send letters to family because I’m always asking them for something – and I know it gets tedious. Don’t want my dream to turn into their nightmare. (Despite not asking, a few generously offered to help). Much to my surprise, I got one disturbing note from an old friend who got one of the letters. Let me also say that I sent a note before the letter explaining to everyone that they would receive an appeal from me but not to feel it was either something they had to do, nor was whatever they decided, going to change our relationship. 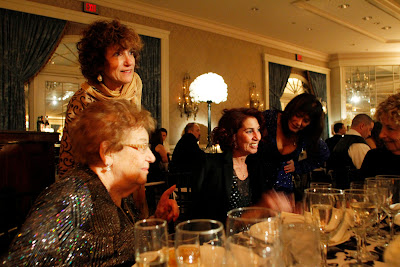 Aunt Peppy and the cuz's--Table 14
Anyway, one friend was outraged that I even asked them to support something that was neither an issue or a disease. The final sentence was something like “you are the only friend we have ever had that asked us to support something that was not a charity.” It was unexpected because I think supporting the arts is, if not a charity, at the very least, important. And a project that addresses critical issues about keeping a family connected is, although not a charity, at least worth considering. But that’s what I think. It never occurs to me that other people might be offended or even angry about what I think. And yes, I am sometimes nonstop, unrelentlessly determined, but most people who know me find it’s part of my charm (she said modestly.) 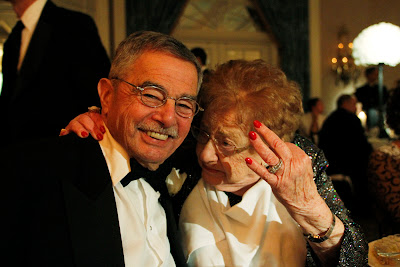 Bill gets the real story from Peppy
Which brings us to another thing I learned today. Not everyone is going to think everything I do, is worthwhile. Additionally, not everyone is going to approve of the methods I use, to do what I think is worthwhile. It’s a hard lesson to learn this late in my life because I thought I walked on water. But now that I know I don’t. I guess I’ll just have to face the fact that if there is no ice to walk on, I just might drown. And I have absolutely no idea what that means – so don’t ever ask me to explain. We’re just sayin’… Iris
Posted by Iris&David at 2:14 AM

Well....I think both you and David walk on water...

Supporting the arts may not a typical "charity" (don't you hate that word anyway!), but it certainly is food for our soul. We sure need more of that.

they would probably been on board if they could get a tax receipt. some people are just SO cheap.

sad they couldn't just leave it alone, but then again maybe it's better you know their true colors.