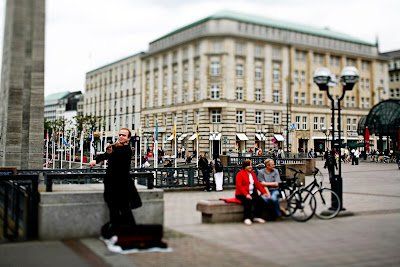 Culture wherever it lurks: a young violinist busker in Hamburg 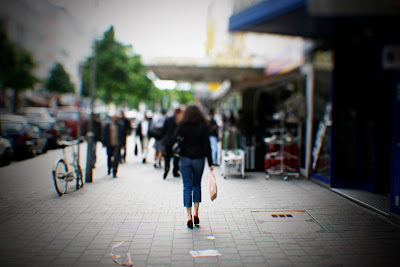 a Hamburg street
This past week I was in Germany attending a wonderful photo conference, sponsored by the FREELENS group, which is the biggest German press photographers advocate group. There were hundreds of attendees, from young and undiscovered tyros, to the likes of Thomas Hoepker, one of the long time greats. 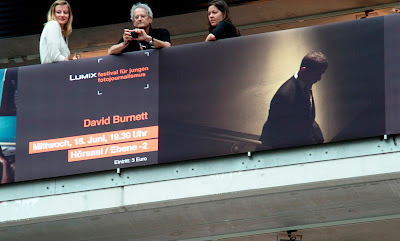 a little PR wherever it happens, not a bad thing, really
The meeting was in a large fairgrounds built a decade ago for an international fair in Hannover. The name of the place in German is Hannover Messe, but it’s anything but a mess. A huge construct of several dozen large buildings, each of which feels very modern, and extremely user friendly. There are toilets all over the place which, as you know, can be the essential defining character of gathering spaces. [I had the delightful and challenging diversion, at a river front eaterie in Hamburg of -- having paid my 70 cent entry fee to pee, trying to figure out how to get OUT of the Men's room. As it happens, the place is ringed with Subway style turnstiles, and you have to know to Press the RED Button in order to go out the way you came in.] 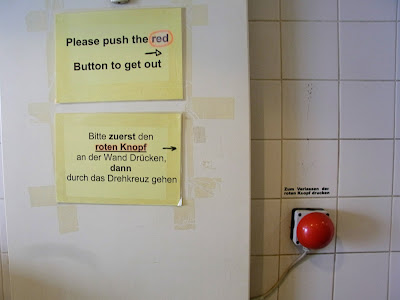 But more importantly they had the ability to lay out some sixty photographic essays, chosen from hundreds submitted, by young photographers from all around the world. Several of the large buildings were filled with the shows, including a ¼ mile long “sky walk,” all of which made for easy viewing. I visited Hannover the first & only time previously, exactly 42 years to the day, before. Having just graduated from college, I was en route with a college friend, to pick up a brand new Volkswagen Squareback, a great little car, at the VW plant in Wolfsburg. Hannover was the airport we flew in to, and I distinctly remember attending a tiny little carnival like fair then, a few small rides, wurst grilled on the fire, and most memorably, a shooting gallery where successful shots on target released a small amount of schnapps into a very public glass which the shooter would then be allowed/forced to drink. I think I may still be feeling the after effects four decades later.

I spoke at the conference on Wednesday night -- it was live streamed around the world on that interweb thing they recently invented, and I was told that in a day or two, it will be available for viewing for those of you who fall into the category of “can’t bear to miss it.” (I will post a link when it goes up.) I’m told I was inspirational, fabulous, and English. For some reason, not that I have ever spoken German very well, but it’s the one language that I feel the most difficulty trying to chitchat in … with my limited vocabulary. After a few days, I finally get to where I can order a krakauer wurst mit senf (Possibly the greatest fastfood item ever created… a fabulous “super hot dog” wurst with masterful German mustard: ahhhh heavenly.) I think my true fortune as a millionaire would be assured if I could just figure out a way to import 500 sausages a day (you cant use the ones that have all the U.S. FDA stuff mandated) .. sell them in a proper grilling cart on 54th street in New York – the kind that New York magazine rates as “Don’t Miss This!” 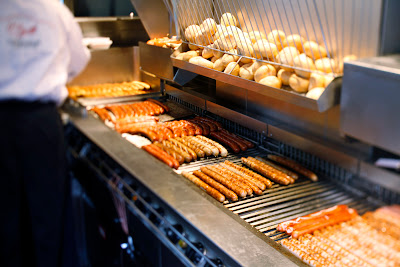 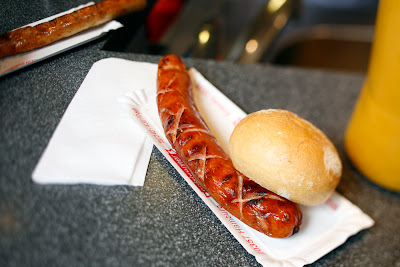 Maybe it’s a world wide occurrence, but I had one of those “what about ME” moments my first morning in Hamburg (the closest international airport.) I needed to get a SIM card for my little French bought Samsung fone (bought it last year when I was in, naturally, France) and went to a small “CallShop” across the street from my hotel. The Hotel? That’s another story altogether, but suffice to say that what you see on the Interweb isn’t always what it looks like in person. In short, when I walked out of my illuminated auberge called the Lumen, 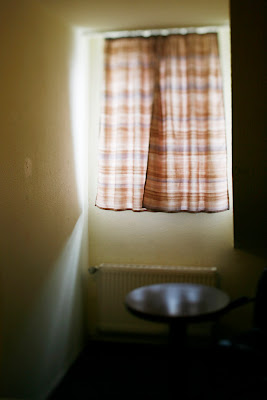 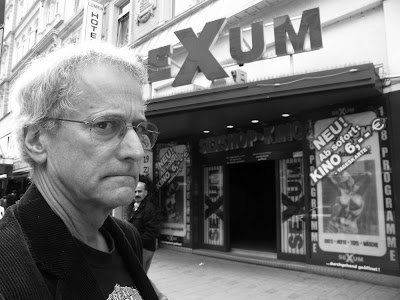 They were surrounded by a host of quite good Turkish restaurants (better, Im sure if you go with someone they know.) But at the CallShop, the young Turkish fellow (he spoke 4 or 5 languages) told me what I needed to speak and connect, and I handed him my fone. Had to Unlock it (5 Euros), Buy a card (10 Euros), and extra Time (15 Euros) And while they cracked the fone I waited patiently marveling at the gigantic array and assortment of available phones. During that 15 minutes, (and here is the amazing part I think) at least 4 different people.. a woman witb a young son, several post adolescents, and a pair of 20 somethings came in. All of them had iPhones. iPHONES!!! You kidding me.? These phones sell for 500 Euros new, or 200-300 Euros for a used one (lots of folks keep upgrading.) And many of these users look like they might have a part time job at best. OK… perhaps making a snappy judgement like this is a bit too quick, but let’s face it. iPHones? Amazing. And me, wandering through Deutschland with my little flip (a la 1999) Samsung. Those are the kind of things which just make you feel the power of the whole globalization thing, whatever the hell it really is. 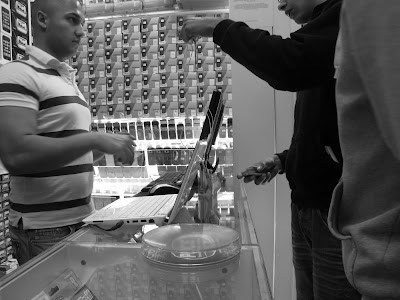 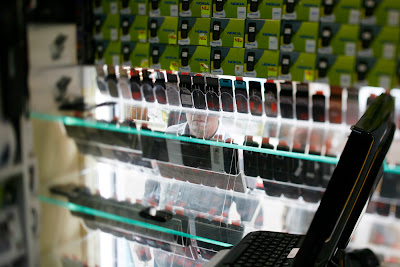 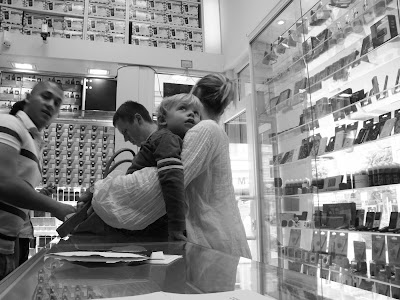 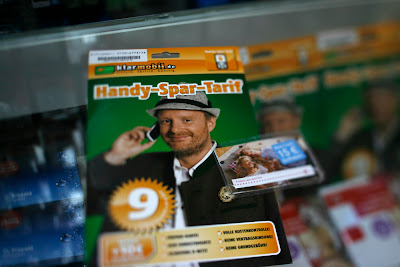 And not only were the wurst amazing, but the young photogs were a great group, and the three days in Hannover flew by. The niftiest piece of gear to make an appearance at the festival was a polo shirt, with a wonderful bit of writing on the back: 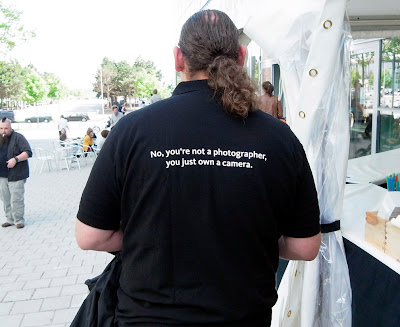 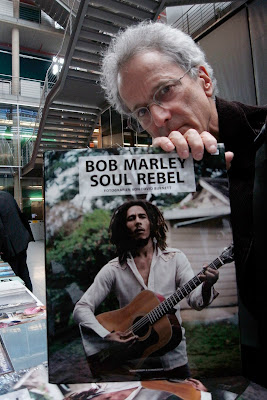 the German version (bigger, glossier, heavier, cooler?.. of SOUL REBEL was on sale..
It became a huge hit, at least with me. Kind of sums things up, doesn’t it, at least if you’re a member of the photo trade. In this age of so many people trashing photographers, and we’re standing our ground. The ground may be giving way to a giant sink hole.. we’ll have to get back to you on that one. But meanwhile, grab the camera, and see if you can make the transformation. You might just BE a photographer…. You never know. We’re just sayin’… David 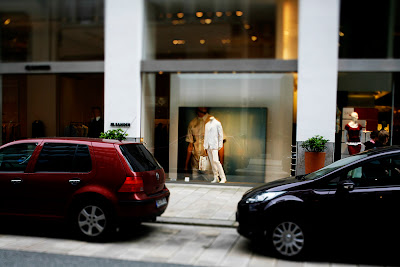 another Hamburg moment (as always, click an image to see it full size)
Posted by Iris&David at 8:13 PM

Let's hear some of those Salt Lake stories too.
And, BTW, you cut a dashing figure in these frames. jay

I'm sharing your shirt pic link on my blog soon-if that is cool with you. I'm writing a piece about the state of the photography industry.
Love it!