A Night At the OPIEs

A great night at the Opies. It was a great night, even if they aren’t actually referred to as the Opies. That is to say, the awards given for Foreign reporting by the Overseas Press Club of America are NOT named for the character played by Ron Howard in the Andy Griffiths show. They are, however a pretty select group of prizes, given strictly for work which is done from ‘Overseas,’ in the great tradition of what the French would call “les grands Reporters..” I have been lucky enough to garner several awards from this group over the length of my career (the Robert Capa Gold Medal in 1974 for coverage of the Chile Coup, Best Photo Reporting from Abroad in 1980 for the Iran Revolution and the Boat People of Vietnam, and 1985 for coverage of the Ethiopian famine.) But this year was quite special, as the reason for my attendance was the awarding of the Olivier Rebbot award, given for photo reporting excellence. Olivier was a good pal for the brief 8 years that I knew him. We worked together often, and spent far too much time in little cafes in search of a meal which would ultimately turn out to be disappointing in a culinary fashion but totally satisfying on a personal one. We met on the subway in the summer of 1973 en route to Queens to see the Guru Maharaji, the 15 year old wunderkind who had created quite the scene in that era when such things happened regularly but were not yet covered by cable tv news (that was almost a decade later.) We spent time in any number of foreign capitals, including a wonderful few days in Cairo, in Paris, and ultimately in Tehran during the revolution against the Shah. It was there that we really bonded like brothers, a friendship forged in both a commonality of working in challenging street situations, but more importantly rising at 6 in the morning and racing to Mehrabad airport to find passengers to carry our films out. There was no internet, no digital camera, no laptop. It was still Canon AE1, and Kodachrome (though I think he shot mostly Ektachrome) and consequently a need to find some willing passenger who understood that much was on the line to make sure the aforementioned films arrived safely in some European capitol where they could be transshipped to New York. It all seems nearly quaint, this vast logistical struggle to merely get exposed films to a safe haven, but it was the only alternative. Hard as it is to imagine a world without email, we actually kept our quite minimal communications with Paris and NY offices to short telexes and when you could score an overseas line, a brief phone call (collect!) I don’t think that I will ever be able to sufficiently explain to Jordan, who at 24 has only known a world where Blackberry messages and IMs are the rule. To conjur up what life was like pre-computer is like trying to imagine what life was like without cans of beer, or iceboxes which ran on ice, not electricity. While you can possibly get there intellectually, you can never really understand the emotions which those constrictions placed on your ability to ‘be in touch.’ Nearly everyone my age who has been in journalism for 30 years or more asks the same question: how in the hell did we ever get anything DONE? Could you really maneuver your lifes travels based on the hinted information in a three line telex? Telex was, I guess, the first email, albeit at 50 baud (todays lines are 64000000 baud) but the economy with which we were forced to write was probably a good thing. I am only sorry that all our telexes from the 1970s are just packed into one of those banker boxes that we keep old bills and invoices. The stories they could tell! 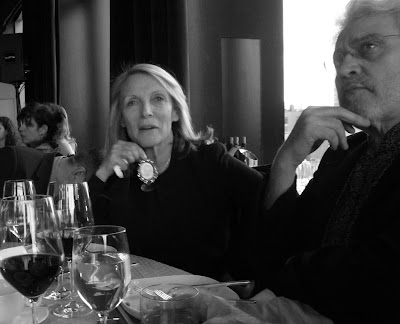 Eliane Laffont with a pic of her granddaughter, Bob Pledge 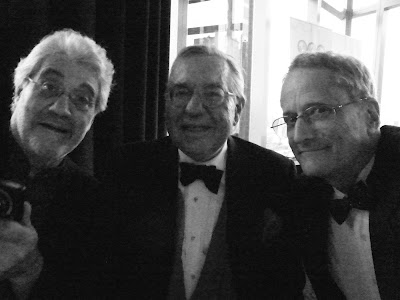 Pledge, John Kifner (who wrote the introduction to "44 Days", and DB 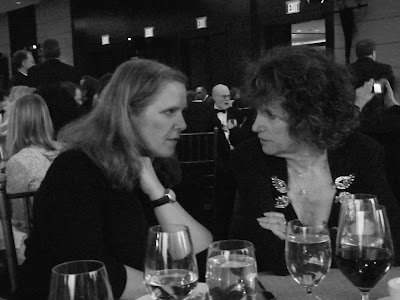 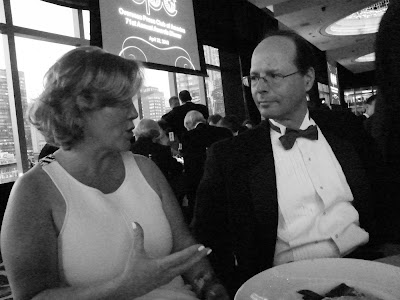 pals Pam Taylor and Tom Herman
Last Thursday was one of those lovely evenings when the awards process only went about 15 minutes too long. When it came to award #4 (there were 20 in total, plus a Lifetime award to Andy Rooney) it was a pleasure not only to thank the OPC but to speak for a minute about Olivier and his life & work. The book which won the award “44 Days: Iran and the Remaking of the World” is a project which was started in a back room at Contact two years ago. Coming home from a trip away, I found that Jacques Menasche and Rob’t Pledge had laid out hundreds of pictures from the Iran pictures in a chronological order, virtually creating what would become the book, a photographic memoir. The interesting thing about this book is that for Iranians in their 50s and 60s, its almost like the book is their college days’ yearbook. I spent a lot of time with Olivier – including those early morning airport runs to find ‘pidgeons’ for our film out of Tehran, and the book is ultimately dedicated to him. It was a meaningful and emotional night to accept the award. And the night capping off with Andy Rooney’s Lifetime award was a nice touch. If you don’t know his book “My War” about his years as a Stars and Stripes reporter in Europe during WWII, you owe it to yourself to grab it. It’s a wonderful and very personal discovery of a young reporter on the ‘big story.’ 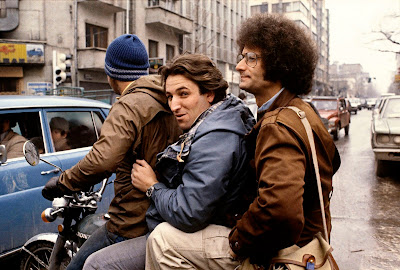 DB and Olivier, maneuvering Tehran traffic (cr.: Alain Mingham) 1979
Olivier was shot while covering a battle in El Salvador in 1981, and the outpouring of grief from friends and colleagues was overwhelming. He was a talent, and much loved. In the year to come we (@ Contact) will be trying to put together a documentary film about his work and his life, 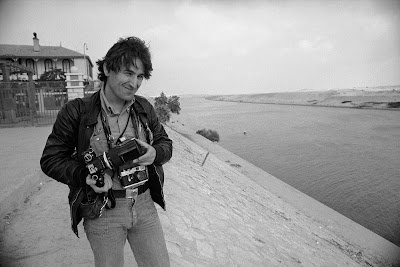 so if you knew Olivier, and we haven’t managed to track you down yet for an interview, please be in touch. He’d have liked that. We’re just sayin’…David
Posted by Iris&David at 12:00 PM

David,
You report having tried "Sheelan Cream Ale", from my runs to TO (Toronto, Ontario), I suspect you actually tried "Sleeman's Cream Ale" though after a few I could be prone to the same spelling error. Glad you enjoyed the city, it was my home during high school years and, of course during the time I found the wonders of photography (Tri-X & TriChem Packs). All the best,