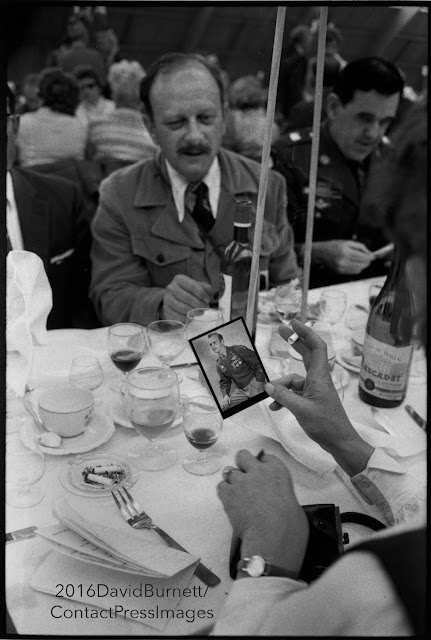 The trip began as a diversion from the post-election blues in Paris, 1974.  The French had just elected a new President. I’d been lucky enough to be his personal photographer (if you have a choice between driving to the event in Clermont-Ferrand, or hopping the candidate’s private jet, take my advice, go with the jet!)  Two good friends, Tom Herman and Robert Wiener, both of whom were living in Paris, reminded me that as it was the beginning of June, we should head on up to Normandy for what was billed as a big “thank you” to the Allied troops who had, 30 years before, taken part in the D-Day assault which eventually drove the Germans out of France, and ended World War Two.   So off we went in a rented car.   At the time, I hadn’t really put together that anyone I knew at home in Salt Lake, had much to do with the War. Mr. Tolman, whose magic at teaching History only became obvious to me decades later, had been a bomber pilot, and was perhaps the only one I’d met growing up who shared his experiences.  And his take, more impish and full of humor than heroism, included his description of the mandatory  “… and there I was…”  moments which I’m sure he’d heard too many of from his veteran friends.  (His “and there I was” moment usually involved a description of his plane dropping its bombs on a cow pasture….)  Later I would understand that those who lived though the tough stuff were generally much less inclined to share their stories than the REMFs who seemed to tell stories at the drop of a hat.

On arrival  in Normandy, we made our way to most of the official events.  There was a mock-assault by current-duty US troops up Pointe du Hoc, watched by some of the Rangers who’d been there in ’44.  A tribute to General Omar Bradley, accompanied by his iron-willed wife, he being the last senior US commander to attend a reunion.  And the event which moved me the most, and opened my eyes to the reality of who these solders really were:  A lunch offered by the town of Vierville (Omaha Beach) for hundreds of vets and their wives that became a focal point for all my attention.  It was another chance for the citoyens of Normandy to say thanks.

At the lunch, wine was served probably accompanied by a few things that most of the vets might have seen as inedible.  The French can be like that.   But beyond the dishes, there was a warmth and welcoming feeling, one which totally belied the old saw about the French being aloof, and not friendly towards the Yanks.  There was a moment when it all came into a frame for me (the Leica M4/35).   One of the vets was sitting opposite a very elegant French woman.  Well, at the least, she had very elegant hands.  Given this was the 30th anniversary, the vet was probably in his early 50s.  He looked as if he were still  of a working age, wearing an early version of a leisure suit.  There was nothing about him that seemed terribly special, but as we all know, special pictures can happen anywhere.

He had handed over a snapshot of himself from the war, one of those portraits that everyone had done, and you can absolutely see his whole life.  From the rakish young man, mustache carefully trimmed, hair slicked back,  uniform fitting to a T, to the look of insouciance, as if he didn’t really have anything more important to do. He seemed very much at home with himself.  Comfy in his uniform, if not his skin.  Near me, on my side of the table, with a bottle of Muscadet on the ready, the French woman holds the picture, using her thumb and 3rd finger, her forefinger busy holding the most elegant cigarette ever.  You see the space of the the thirty years.  And in that moment something struck me.  The combination of American spirit, and Gallic formality.  The saved thanking the saviours in the manner they best know.

I began coming back to Normandy again in 1979, then in 1984, and every ten years since.  It has become a story I can’t stay away from.  When you meet the vets - literally our uncles, our dads, our folks’ school buddies, you feel the appreciation for what they did, and how they did it.  They spent several years in uniform understanding they wouldn’t come home till the war was over.  They did their part.  Some saw months of combat, some drove trucks, some flew planes.  But they all understood that the ultimately the  job was about finishing what they had to do.  Over the years have I have done this story, I’ve felt a sense of envy for the camaraderie that they shared with each other.  How do you acknowledge those who did something for a cause greater than themselves.   I guess you say Thanks.
June 6, 1974   Vierville sur Mer
Posted by Iris&David at 1:26 AM

Your writings, M. Burnetti are, if not often on a par with your photographic abilities, certainly here, and in so many ways, superior!

How's THAT for flowery, and excessive prose? Skip