From the annals of "I wish I'd been a better photographer.." in the spring of 1970 I was living in Miami, not a lot of work coming my way, but still stringing with some regularity for TIME. I was living in tropical splendor in beautiful Miami Springs near the airport (I could bike over and see some very cool 1940s planes, most of which were being flown by outfits from Salvador/Guatemala/Panama, and serviced in Miami.) One day I got a call to join the local TIME stringer, Bob Delaney (who also was a big star in local news radio, and he always signed of with "....total information radio!...." which I thought was a pretty good attitude for a news guy.) Our assignment was to drive north a ways (one of those trips where you realize how big Florida is...) to Bartow where we would meet a guy who ran a little soda shop, and who claimed to be the oldest living American. I'd heard of Charlie Smith, but didn't really know that much about him. (Yes, this was in the days before Cable News, and 24 hour cycles. In fact it was only five years after the first Mustang!) Bob was determined to get to the bottom of this story, and share it with his "total information radio" audience, as well as the twenty or so million TIME readers. We'd heard there was this guy in Florida who claimed to have come from Liberia in the 1840s, and was the last surviving American slave. That he was 128 years old. That was something. So we drove and drove, eventually arriving in Bartow, a little backwater town, and it didn't take a lot of asking around (yes, this was before Google Maps) to find the little shop where Charlie Smith sold Pepsi. What I'll never forget is the opening of the interview. Bob said " Charlie, they tell me you're a hundred and twenty eight years old, is that right?" After a short pause Charlie answered with great determination. "No, no..." he started, and at which point I thought, 'this story is SO not happening....it sounds like a wild goose chase.." But then Charlie continued, "No, I'm a hundred twenty seven." 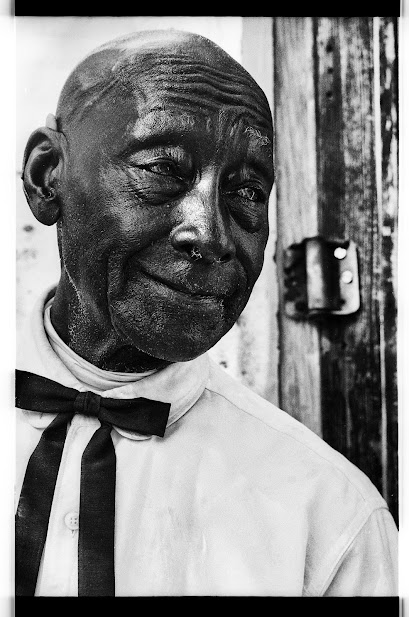 Charlie Smith, Aged 127 1969
It was one of the coolest conversations I've ever been a party to, if only as witness. They talked for a while, Bob got a couple of "total information radio" worthy quotes, including Charlie talking about seeing Abe Lincoln as a young guy. And it was then my turn. Charlie's son came by, and if I remember right, he was in his 80s. But I kind of blew it. I didn't really think, I just reacted to what was, rather than try and make something a bit more incisive. Years later Carl Fischer made a portrait (I believe it was him) for Esquire, and when I saw that, I realized I was just a little too much "along for the ride." In the end, I got a few pictures, and while it could be said I was under equipped (I tried shooting something inside the shop, lit by one little dangling light bulb - not very successful) it was more a lack of inspiration than equipment. That tends to be the real issue when things don't work out. You just don't give it the 110% that it deserves. Since then, I realize that when you re doing portraits like this, one thing to remember is - keep moving. Change angles, distances, lighting. Keep it all in flux, and when you see something good, work the hell out of it.
I wish I'd done better with Charlie Smith, but if I live to 128, at least that gives me a good chunk of time to practice what I learned that hot day in Bartow.
photograph shot 1969 ©2020 David Burnett/Contact
We're just sayin'... David
Posted by Iris&David at 11:24 PM

Who are you? And why do you write these blogs?. I came upon your blog when I looked up the superstition of turning over a glass and found your blog. I love it . Not normally a blog reader but I like yours.

Seems you were a photographer for time, which is interesting because I spent the last few days trying to get through my National Geographic’s which I can’t bear to toss. I grew up with them and the worlds they showed me through their amazing photography.

Love to know who you are and I will keep reading
Suzrube@gmail.com