This morning, I was reminded by an Al Neuharth (USA Today) column how fortunate I was to have Betty Friedan, Bella Abzug and Ella Udall in my life. True, they were flowers of different species, but each exceptional in their own right. 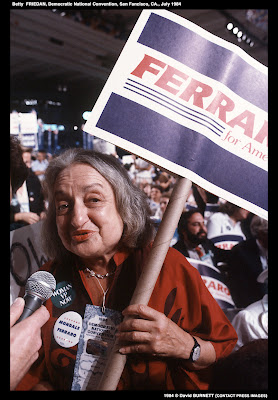 The column, which was really a comment on the “feisty” way NOW (National Organization of Women) operated under Betty’s direction, and the Caspar Milquetoast approach of the people in charge today. He said if the Komen Foundation had done in Betty’s years, what they did last week, women would have been on the streets… marching, not just commenting. And he was right.

The anniversary of her birth and death, (she was born -1921, and died- 2006, on February 4th) were celebrated the same week Brinker allowed her foundation to become a political tool. Seems like awkward timing – if you knew about Betty and the progress NOW helped the women’s movement to make. If you weren’t around in those days, and if you expect to find her name in most history books, then you have been denied a wonderful opportunity to learn about how activists used to make things happen.

My focus of issues that concern women (life, death, and everything that happens in between) started in the 70s when we burned our bras. Since I never needed one, it wasn’t a big sacrifice. But we didn’t measure boobs, just commitment to a cause. We were always vocal and visible. Betty showed real leadership when her brainchild (NOW), was finally an organization with which the political world needed to contend. Bella, as the Congressional Representative from New York, who always made important noise, and wore outrageous hats. And Ella, the wife of a presidential Candidate who refused to behave like the wife of a Presidential Candidate.

But first to Betty. (I may have to blob about Ella and Bella at another time). We didn’t bond over abortion, the economy, or childcare. As the Chief of Staff at an international government agency, I was able to fund “speaker’s trips” for both Betty and Bella all over the world. So, yes, it was the money, not my incredible charisma, that allowed me entree into the lives and works of these special women. Somehow, maybe because they saw me at all kinds of women’s issues meetings, they assumed I should be included in whatever important meetings they had arranged. Here’s what I most loved about those events: we would enter as a group, (different sizes, shapes, and color), but often it made no difference to the people with whom we were meeting. We were all just girls.

As soon as Betty realized that the meeting was primarily to listen rather than be heard, she would just say, “OK, it’s time for us to go.” And no matter how long we had been there, we would all just stand up, say a pleasant goodbye, and we were gone – often leaving the people/person, with whom we were meeting, surprised and in pretty much in the dark. Betty would say, “If they didn’t get why we left, they weren’t worth the time we had already wasted.” There were never any apologies. 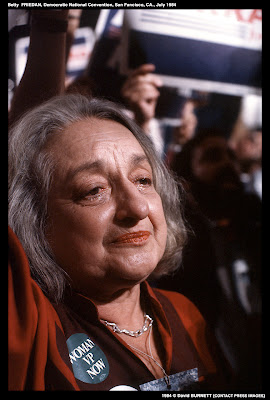 Betty was small in height, and enormous in stature. She was very well aware of the importance she had to women who worked with her, and those who admired her and often wanted to be her. Much like trying to explain to today’s young people what life was like without cell phones, the internet, and GPS, in today’s political climate it remains a challenge to describe the powerful impact and heartfelt intensity of someone like Betty Friedan. We’re just sayin’… Iris
Posted by Iris&David at 11:57 PM